hi,
recently i just upload my app on mi store after 8 hour my app is rejected said your app contains virus. even my app is simple no extension and simple blocks here image 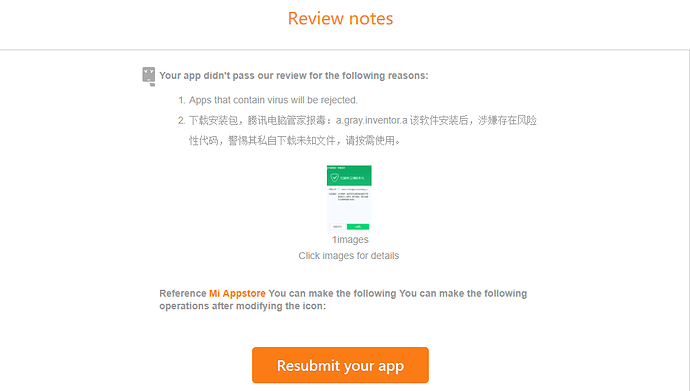 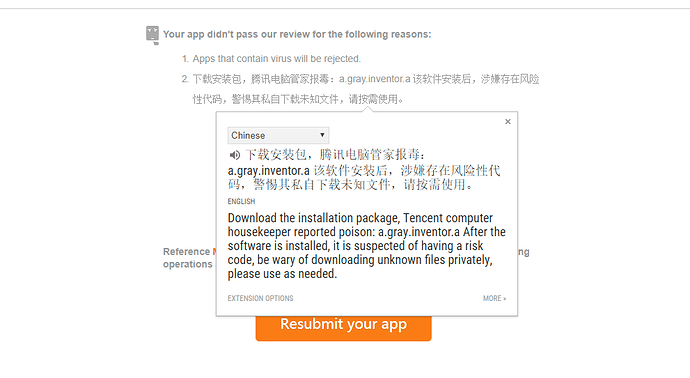 Earning apps could be considered Spam/Virus

What is your app?

no its not earning app is only status apps i upload on google play store also its successfully upload .
I dont know why mi store said app contains virus.

You are going to need to translate their terms and read them. Perhaps your app is not acceptable to them because it is a “status” app.

its shows same issue on every app either its education or earning app.
Any type of app you submit will get same issue.

Did you generate it on Kodular? Which extensions are you using?

Did you google “a.gray.inventor.a” to see if there are known vulnerabilities?

even after checking it. Shows same problem

Maybe Dev’s know something about this?

Please stop worrying yourself over some of this stores. they have a habit of rejecting apps that is created with the app inventor family or drag and drop base built apps, mock-up apps etc. no matter how hard you try; as long as it is not an android studio or hand coded project, they will reject it. Example of such site to is SLIDEME.

I have the same problem with Appgallery (Huawei store).
I create an app with monuments in paris and it use google maps to destination of monument.
The app was rejected :

Dear developer, we have detected that your app carries the “a.gray.inventor.a” virus. Please fix this issue

I have contact Huawei to explain that, i hope the app will accepted.

Sometimes the antivirus engines can detect good programs as malware, for example when I code a simple app (on Kodular or on another platform), it can detect as malware. You may need to buy a certificate to prove your app is safe.

Also, PUP is not a virus. It means Potentially Unwanted Program, and these apps usually contain junk content, a lot of ads or something looks which is unsafe.

I have the same problem with Appgallery (Huawei store).

And looks like these app stores checking the APK with their own engines, so it is normal that these app stores thinking your app is malware like as in VirusTotal. When your app passes the malware check without any problem, then Mi Store and Huawei Store won’t think your app as malware.

I tried to explain this to Huawei, I wait for their answer, but if it does not work at once, it would be necessary to withdraw admob and surely that it will pass

@Shona_Creations Why do you want to upload on Mi Store?
You have uploaded on Play Store which is enough.

Because mi store have also biggest user base according to statista. and Tencent MyApp App Store also. And i considering chinese users .But after i know its very complicated for me to launch app on chinese market. Now i drop this plan . Now i only focus on google play store.