Bug in Exit Notifier when have more than one notifier

I am facing a issue in my app which i build on kodular,
My app consist of a Splash screen>Quiz selection screen> Respective quiz screen with start button.

i have one notifier in Selection screen which is used from exit app confirmation ( yes/cancel)
second notifiers are present in each quiz playing screen which pops up during question are loaded from airtable.

Problem is in case 2 where notifier does not fires up in selection screen after using any notifier that pops up in start quiz screen.

I would suggest dragging a second notifier for now. Use Notifier2 for your Quiz elements, and Notifier1 for your System/Startup elements.

If that works, then the issue is probably around the logic about what is being selected, and the making sure you have the proper post notification selection method selected.

but notifier 1 don’t executes when coming back to quiz selection screen after completing quiz.

Don’t no what iam doing wrong?.

You are switching screens?

Are you closing and opening screens properly?

A notifier block on Screen1 will not show up on Screen2 unless called from Screen2. Screens are like mini blank environments and do not work together automatically

now pressing back button on selection screen. Now at this time exit confirm notifier should come …but it does’t.

Do you have a function for what to do when the backbutton is pressed.

Unless I see blocks I am blind

ABT.aia (3.0 MB)
have look to this file…modify it for optimization if you can

You have duplicate screens. I dont know what your issue is.

Are you sayinng this block is not working. 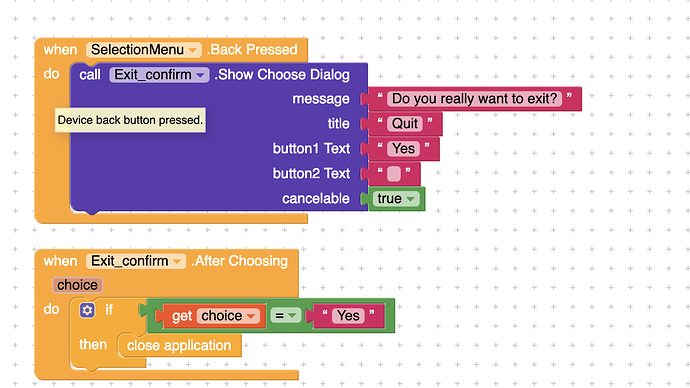 @cian Which method of switching screens is he using, tribblehunter method or manager method

No methods. No cleanup.

i don’t know these methods

Switch screens per above note, and if there is an issue show the blocks.

ok will clean up the code.

Of course it won’t work, you use neither of these methods

Note: if you only use the open another screen and never the close screen block, you will run out of memory after a while. Also reopening an already opened screen is a bad idea. For example if you open Screen1 twice, you also have to close your app twice!

Finally, to get the Notifier to work you need to use the tribblehunter method

There is an error or a bug, I don’t know what it is but if you use splash wallpaper and use this method (close this screen first to change to another screen) whenever you come back to the first screen from where you changed to another you will see splash wallpaper in between the changing of the screen.