I was using Taifun Player, but I read that it gave problems on some Chinese smartphones and some locks appeared on the play console. Then I read through the forum that exoplayer also allows looping and I tried it. But while TaifunPlayer does not close the application even if the screen turns off, exoplayer about 10 or 15 minutes closes. I’ve tried it on a smartphone with Android 6.0.1 and in the android studio emulator with android 9.0 with the same result. Also say that I tried tricks like leaving the standard player running with an empty sound to see if it got it not to close, the same thing I did with the TaifunPlayer player letting it work with empty sound while exoplayer was playing. Always about 10 or 15 minutes it closed.

1 Like
How to to run a function in background even after the app is closed?
2020: The Year in Review
My 1st App Created On Kodular
Several improvements of the ExoPlayer component
bodymindpower (Anke) February 13, 2020, 11:10pm #2

Yes, on some Chinese devices (eg Xiaomi, OnePlus) there are looping issues (gaps) with the TaifunPlayer. However, I had no problems with the ExoPlayer on any of my test devices (Android 4-10). Neither with looping nor stopping sound / music in sleep mode (standby). And my sounds / music have to play for a long time (hours).

Therefore, post a test AIA that replicates this issue. Which (test) devices and Android versions are you using? Did you test with APK or Companion?

i have received many Pm about that issue but still waiting for that to be get fixed,

Hi Anke, I have been creating a test aia. I tried first with just one Exoplayer player, and as you say, it didn’t seem to stop. By adding a second Exoplayer, it started to stop after 15 minutes or so. Although only one player is active, when I add 2, it stops.

On the devices I tried it with the apk are:
Physical device:
BQ Aquaris E5 4G with Android 6.0.1
Device emulated in AVD (Android Studio):
Pixel 3 with Android 9.0 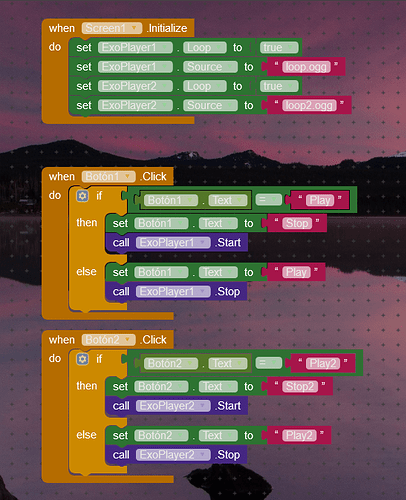 Yes, I was able to reproduce this issue on a Samsung Galaxy Note8 (Android 9). However, the sound begins to stutter for me after about 50 seconds after I put the device into sleep mode. The sound then stops later. This issue does also occure with only one ExoPlayer.

The problem also arises on my device if the app moves into the background (i.e. after pressing the Home button). As soon as the charging cable is connected, the sound starts again. Also when I wake up the device again.

So connect the device to the charger and test …
It seems to be a problem with the energy saving options (on my Galaxy Note8). 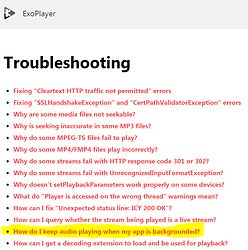 Player stops when device is sleeping

Issue description I created an Audio Streaming app that works with HLS and obviously should work in background. It seems that on...

Note: I have no issues with:

Searching for information on your links and searching, I decided to try and add the permission:

At the moment I have tried it on the AVD with android 9.0 and the application does not close. I will try the tests with my smartphone with android 6.0.1. I hope it works too. Can you confirm if your devices adding that permission work too?

Allows a regular application to use Service.startForeground .

Yes, I have already seen that and tested. I declared this permission in the Manifest, unfortunately without success … you need a notification

To keep audio playback alive in background, I need to start a foreground service or just displaying PlayerNotificationManager notification is enough...

Have you tried adding the notifier that is in experimental?

What if you keep the screen from turning off? 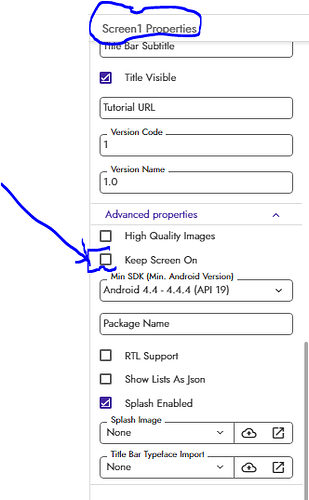 It’s not a great solution, but until something else can be done…

What if you keep the screen from turning off

Yes, of course this is always a possible solution, but the users do not like it, because this drains the battery faster. I have this option as the ultima ratio in all my apps and then let the app close automatically at the end to save the battery.

But the more interesting question is, why is that happening with ExoPlayer and not with MediaPlayer or TaifunPlayer?

Note: The Taifun Player is only a MediaPlayer (Player component) with a special (additional) function for seamless looping.

i have received many Pm about that issue but still waiting for that to be get fixed,

Is there a reason, why you got a lot of PM for this issue? What was the content of these emails and why wasn’t it posted publicly? How should it be fixed if the Kodular team gets no knowledge of it?

I see no reason not to post this publicly, as this is a big problem with the ExoPlayer that makes it practically unusable. That should interest all users.

I spent a lot of time switching my app from App Inventor to Kodular. Fortunately, I have not yet updated my apps to the Kodular versions in the Play Store. Otherwise I would certainly have received many 1* ratings.

because users are sending me personally messages for there problems and many of them like making radio app for their radio station and they are facing same issue when radio stops automatically.

… and many of them like making radio app for their radio station and they are facing same issue when radio stops automatically.

Thanks for the info, but that might be another issue that has arisen especially since Android 9 and is due to the fact that the WiFi connection is lost (throttled) in sleep mode.

None of the App Inventor distros have background services feature. It would be great but not available yet. There’s a block to keep the screen from turning off though. Would that be useful for you?

you need a notification

I have media player notification extension by @Ken, and the and music keep Stoping (when screen is off) after 40- 50 seconds on my Samsung A50.

I have media player notification extension by @Ken, and the and music keep Stoping (when screen is off) after 40- 50 seconds on my Samsung A50

Note : I have no issues with:

… no issues with these too:

The MediaStyleNotification Extension just provides a notification with action buttons.
It doesn’t prevent the app or data connection from being killed by the OS.

The problem here seems to be about this: 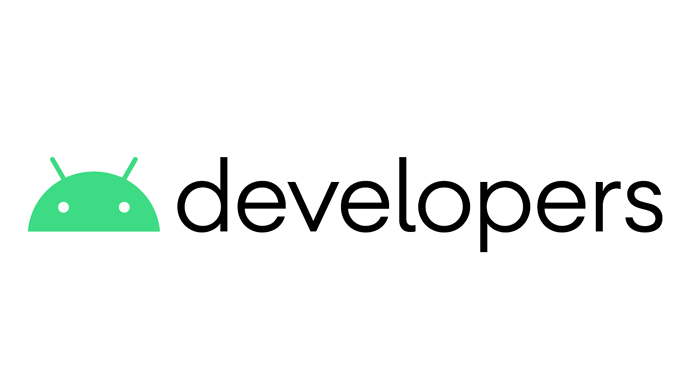 Test and optimize your app for the power-saving features in Android 6.0. 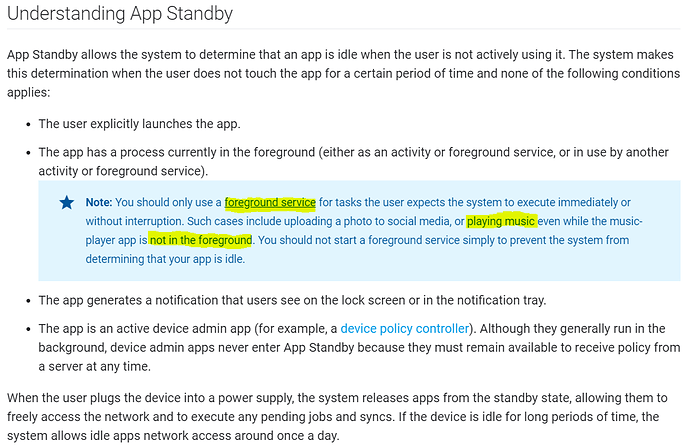 If anyone knows or finds a solution to this problem, it would be great and would help me and many others. I am happy to pay $ 100 for it.

which Android version (A50)?

Samsung a50 is running Android 9.

MediaStyleNotification Extension v1 allows you to use Play and Pause actions from a Notification including from the Lock Screen is now available for purchase. This Extension was Developed By Ken Nichols with Help from Andres Cotes, Thank You...

which adjustments have been made in the Manifest?

I haven’t added anything to fix this problem

does the sound stop immediately after 50 sec or does it stutter first?

The music stops after about 50 seconds after turn off the screen and sound start again after accessing the phone screen again, and I think it is a problem of new Samsung models, because I also had this problem with Spotify.
From the phone settings I have removed my application from the battery optimization and now it seems that the music no longer stops (PS: I didn’t test to let music for long time).

does the sound play again when the charging cable is plugged in or the device is woken up?

Allows a regular application to use Service.startForeground.

I tried too to add this permission, but without success too.

I hope this information will help you to solve this problem for everyone.

It is also curious that even if you put another mediaplayer that does not have that problem, along with exoplayer, the added player does not prevent the app from closing.