Does that mean I’ll have to delete all projects?

It has been answered above. Please check the FAQ:

I have more than 10 projects, but I don’t want to pay ( or keep paying ) for Premium. What will happen to those projects?

You will still be able to work with and build your existing projects. The only restriction is that you will not be able to create new projects until you delete existing ones.

Hi all,
I think a lot of people want to bring Admob ads back. Also, is there a affiliate marketing program to profit from your site, especially since we have YouTube channels in which we explain your site, I hope to put it and give me a special discount for my YouTube followers

I think kodular stuff should rethink of this step cause this step will make a lot of users leave kodular stage .

In Brazil we have a saying that “forever always ends” 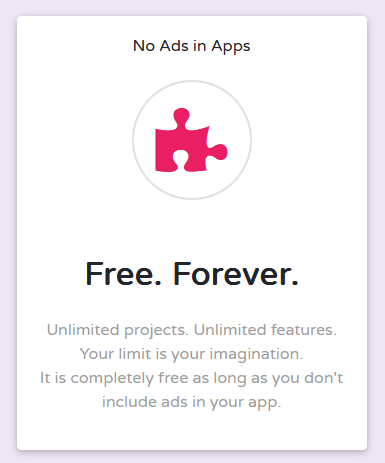 Ad Manager components will continue to have commissions, but with better ad inventory, dedicated support and enhanced integration

If I stay in freemium plan and pay commission for ad manager why I cant have better ad inventory? I am earning average 25 dollars monthly and you take 5 dollars of it. It makes 60 dollars in a year. (I must gain premium automaticly

and why I cant have better ad inventory and enhanced integration? better ad inventory and enhanced integration will get your earnings higher, too. You can say “so get premium”. But in my opinion this is not a good idea and your timing is not good. Maybe you should go back to admob extensions with comissions with ad manager or make ad manager stronger. I know many people earning much more than ad manager with admob.
With all my respect. Just consider it again.

Although I do like the idea‒ I think creativity will be hindered with a limit on the number of extensions that can be imported to projects.

A burden is now put on developers…

It’s not my intention to come off like thought wasn’t put into the quotas, however many projects use upwards of ten, sometimes twenty, extensions.

Staff should keep this free forever as long as you don’t include ads in apps idea and consider revoking the limits by creating three plans. e.g.: Free forever plan, Freemium plan (with limits and ad manager only) and Premium plan.

Just 5 days to adapt…this is insane.

Limit to 5 extensions…another decision that is not nice.

The extension limit is bad , please no. We cant pay like this way!!!

I understand that somehow you need money to support the development platform, but penalize the vast majority of enthusiastic programmers and students who probably don’t seek extraordinary gains in their projects.
I don’t even think it’s fair to block the generation of APK packages, since it’s not possible to publish on the Google store.
It would only be reasonable to limit the generation of AAB packages to developers who use monetization in their projects.
I believe that before charging a monthly fee for using the platform, all pre-existing bugs and bad behavior of native components should be resolved.

please diego make the limit of add extension up to 7at least !
why ?
because all user need to this extension in app :
recycler or dynamic
text alignment
notifcation
database (spreadsheet,baserow…)
phase
json to dictionary !

I’m so impatient to see ios in Kodular.

I fully support the premium plan.

This is impossible because

Once MIT AI2 supports iOS then it will become possible for Kodular to support it too. There is no timeframe as to when AI2 will support it. And there is no guarantee that Kodular will then start supporting it.

My friend, I think this chaos is’ an end.
Memberships will be canceled.
Android Studio free.
Appinventor is free.
www.kodular.io can you try to put ads?
Honesty always gives.

I’ve been using kodular for about 3 years and I have more than 20 projects. Some as a study base or model. Now the question is whether it’s worth it or not because even in conditions, three things should be taken. 1° Many countries do not use the dollar (in my case) where the currency is very devalued. This becomes relatively expensive. 2° Should have informed and given at least 30 days for the changes. 3° It should meet an evaluation on the opinion of the developers to have a middle ground between the parties. Aiming to satisfactorily meet the platform and developers.

Shifting the topic– why not provide some extensions as built-in components, for example more popular extensions such as Phase.

You could receive permission from the developer to add it to Kodular then update it when a new version is released, while still leaving ownership to the developer. Or, as an alternative, host a GitHub repository where extensions and their metadata (?) are added through pull requests.

For example, if I were to submit a pull request to said repository, the file structure would look somewhat like this…

These would be in extension format, but would have to be considered built-in components somehow. Should the developer not feel sure about providing source code, this still allows their extension to be “featured.”