How to make a "read more"

Hello everyone, this time I come to you because I would like to create a system of “read more” when a text is too long. I would like something like this: 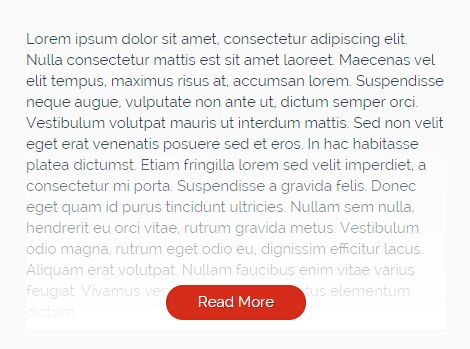 I’ve already managed to do it this way:

But I would really like the blur effect on the text, do you have an idea? Thank you all!

Ah, if there is an extension, I would like to thank you! I searched but couldn’t find, maybe I didn’t type the right words in the search

But I would really like the blur effect on the

didn’t type the right words in the search

Oh yes, thank you. Indeed, I had found this extension and there is no blur effect

Thanks anyway for your suggestion!

StyleTextUtils Extension Hello everyone, Today I’m launching my second extension StyleTextUtils. This extension is used to style the text on the following components Label , Button , Datepicker , Timepicker, Checkbox , Switch , Textbox , Radio Button Blocks [component_event] Event raises when any clickable text is clicked. The component parameter returns the component on which text was clicked, text parameter returns the text which was clicked [component_method] Sets part of the tex…

Thank you for this extension. The blur effect is ultimately not what I’m looking for, it’s more of a transparency effect. I’m going to play with the opacity of the text, it should work.

I’m trying to use segment blocks and the “for each number” block but I don’t understand how to put them in the “set text color” block, do you have any idea please ?

If possible you can try this extension too

Great, thank you ! It doesn’t solve my problem to start the scenery from a specific character, but it can help me.

I thought if not to facilitate the opacity effect, it is to create a gradient which starts with the color of the text and which ends with the color of the background. It’s a bit cheating on the effect, but the visual rendering would be there.
But the same, I have to manage to start the gradient from character number 130 and end at 150

Make a two list in global variable.
In One list add the text from segment 1 to 130
In Second ,add the segmented text from 130 to 150 into as a list,

And by using for each items to the list block try to add your desired design ., May be work to you 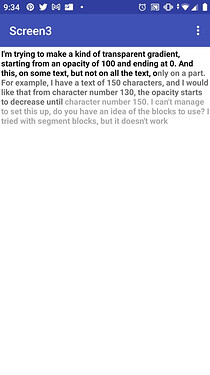