@Hossein
Unable to import an aia built in Appybuilder and exported to be imported by Kodular.
The reason because the absence of DateUtils extension, which was a native extension in AppyBuilder.
Thus my source cannot be imported at this moment. How to solve this? 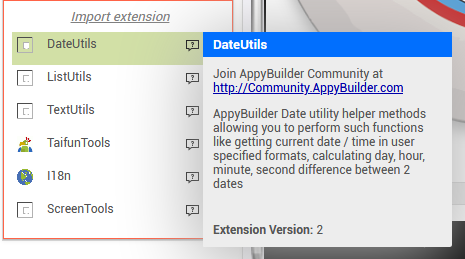 I think you should be able to import those extensions manually.

Try to remove it from your app. upload it to kodular then use it as extension.
dont forget to save your work in case this attempt fails

It is not only this extension, but more extensions it complains about, when importing.
Removing all the extensions I used, makes my app useless.

Interesting. I’ll try a simple app worth that extension and let you know result.

Did you find a solution yet @Hossein?

You are correct. It was built into AppyBuilder and not really an extension and that’s what’s causing the issue. From AppyBuilder, can you remove your DateUtils blocks?

All the built in ‘extensions’ give the same problem. Also Firebase.
Removing those elements give me a crippled and unusable app.