Is it possible to use any ads extension in kodular ?

I know it’s not possible because i had tried it earlier but it’s not export apk.
But in youtube there’s a youtuber who give paid Facebook ad extension in $3 and in his video he give proof by exporting apk.

Video is in hindi language link

Ads extension are not allowed in Kodular.

Its an old video friend. Its not even available on youtube.

I came to know kodular dont allow such extensions anymore. so its sale was stopped.

Its an old video

Published on 24 juni 2020 isn’t that old. I will now have an eye on your channels,what you are selling and publish. Thx for the info @Yash_Agarwal_376 !

I came to know kodular dont allow such extensions anymore

You are a member here since 2017. You already should know what is allowed and what not.

instead of spamming posts

I am not spamming any post . I am just give information to the community about that ! I am not against to anyone . I was just curious that kodular support ad extensions or not !

Its an old video friend

Seriously your video uploaded on 1 month ago

I see you also advertise earning apps in your channel. You might want to take them down as soon as possible or risk losing your Kodular account

Exactly , every channel spreading earning apps and selling extensions without prior permission and deceiving people in any way He/She must be banned .
They are spreading negative image of Kodular that’s not right and its very shitty thing.
Kodular is something awesome it has become very popular and we can develop apps of very high quality …we should be thankful to kodular instead of spreading negative things.
I recomend to write a rules and regulations page for kodular saying that (if not there) everyone doing this must be banned .

#offtopic Totally agree with you @Zia_Choudhary
They also spread negative image of android development by their perspective android development means only (Earn money, Earning apps , Poems and Jokes Apps ). And every channel knows only about two things admob and fb ads because their motive to come in kodular is to only earn money .
I think the time is come when kodular need to strict about these channels and makes rules and regulations about their brand.

im not an extension developer. its other person who asked me to promote it. coz i have good subs on my channel.

no its a proper income app. that app dont ask users to click on ads and all. it consists of spin system which is totally allowed , also it has rewarded videos ads which is totally safe . so how can you say im advertising wrong earning app ?

im not an extension developer. its other person who asked me to promote it. coz i have good subs on my channel.

Try to understand that by promoting such things, someone will waste money unnecessarily.

Thats why that VIDEO is no more on youtube.

a spin and rewarded video app is a genuine app. it dont violate any google admob policies .

Please read our monetisation guidelines before you claim your app doesn’t violate our policies
https://support.kodular.io/help/en-us/8-monetizing-apps/26-monetization-guidelines

Apps with the sole purpose of watching ads or completing tasks in exchange for real-life currency (commonly known as ‘earning apps’), or encourage users to click on ads are strictly prohibited and will be blocked. Earning apps could also result in suspension of your Google Play, AdMob or Kodular account.

Google’s AdMob policies aren’t the same as Kodular’s. Kodular may, at its discretion, choose to prevent the monetisation of apps that it does not wish to be associated with and it feels do not represent what the platform stands for.

Thanks for the info

I see you also advertise earning apps in your channel.

I think you are talking about these: 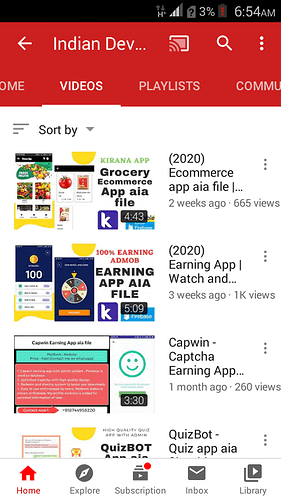