To be rewarded again he needs to close the task manager app and log in again.
How can I solve this? 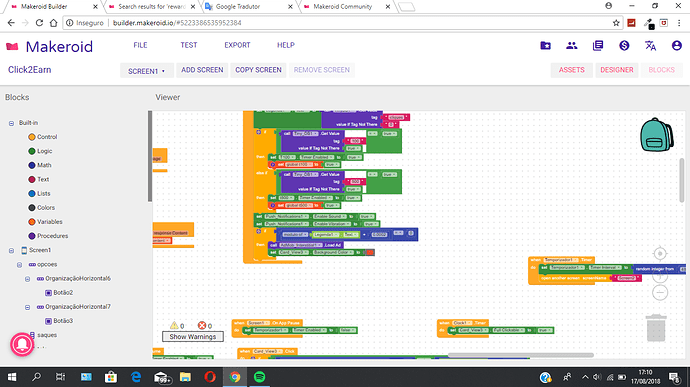 image.png1366×768 168 KB
This second image is from the “Initialize Menu” but I can not show it full!
But everything you have about the video ad is included in the images

I mean … it happens! But it only happens the first time the user views the ad!

It seems you are making an earning app. This not encouraged by Makeroid and forbidden by Google. You will get your developers Account taken away if you publish that.

hello. i have a question about that. I making an app to provice lessons about learn app inventor, makeroid…and include project file to download. I requested create acount to download, and each new user, i give some coin, and this coin will decrease when download project file. And to get more coin, user must watch rewarded video ads. And it ok???

That also looks like an earning app. It is double. You get money for dispaying ads but you force users to watch to earn points. Google wont allow that.

So…what must i do to use rewarded video ads? So difficult to use this ads…

It seems you are making an earning app. This not encouraged by Makeroid and forbidden by Google. You will get your developers Account taken away if you publish that.

Not recommended or not allowed?

No, users can also click on another button to earn points! I did not put only those two that I exhibited.
But anyway, video reward ads are for something, are not they?