I have made a test app. In the companion as in the apk, AES 256 fails both times. 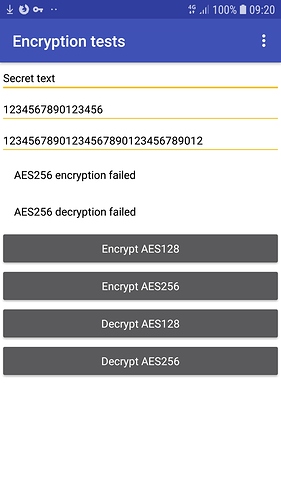 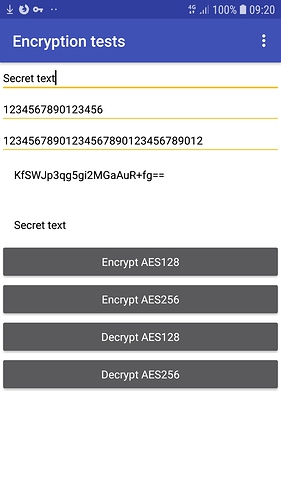 Thanks for reporting it

The behavior of the AES128-key is not in line with expectations.

It seems to me that 16 hexadecimal characters (=128 bits) are expected, But when I change one of the originally choosen characters (1234567890123456) in a random character (change the 6 in a %), the encryption still works. As long as the key length stays 16 characters long, it is excepted. That is not a normal situation, because I do not know the strength of the encryption key.

How about the AES256 key, because I expect the length to be 32 hex characters (=256 bits) and which characters are excepted for the key?

It seems to me that 16 hexadecimal characters (=128 bits) are expected, But when I change one of the originally choosen characters (1234567890123456) in a random character (change the 6 in a %), the encryption still works . As long as the key length stays 16 characters long, it is excepted.

I believe that is correct and the algorithm requires 128 bits

dear friend, plataform of kodular has been update a couple days ago and aren’t same result’s. Look

image270×585 67.8 KB
encrypt aes128 result are diferent to before last days. I stay very interesting in understand new algorit or modifications to compatibili with myself other devices
Hossein (Hossein Amerkashi) January 6, 2020, 1:08am #9

@cs_omar We had issues-report on AES 128/256 encryption / decryption and as result put in updates for it. Are you having issue decrypting to get back the original text? Is this for both 128 and 256? While waiting for your response, we’ll check into it.

Update: Here is a quick test that I just ran (using latest companion):

Thanks for response. Look, before that update, my devices and my app were comunicate without problem. Encrypt responded of app was same of my devices and onlinetool aes128 encryptation. Now (after kodulaar platform was updated ), encode aes128 get another response, like algoritm was modify. look this is encriptation in my devices

i confirm with online tool 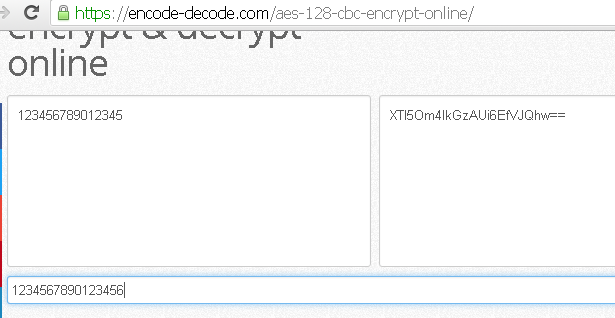 but in app not same response 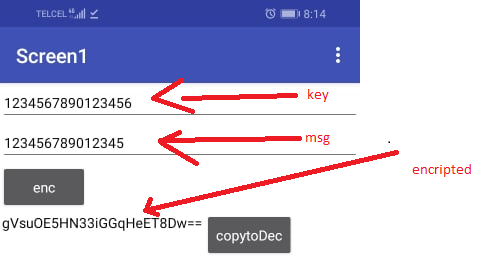 Encrypt decrypt working fine, but internal algorithm has changed. my first impression is a special process internal for key.
Please we need modify or know why aes128 module does not match anymore.

We might be using a different algorithm than the online tool. I’ll check into it.

My further investigation shows, that these online tools are using AES Cipher NOT AES/CBC/PKCS5PADDING, even thoug

Before the update of kodular, it worked and they matched all results.

Some special treatment internal to key before use to encrypt?.

Anyway, for the blocks encrypt decrypt it work fine. But, i have to equal change in my external devices. Thit is tha situation.

Or some other padding method https://www.cryptosys.net/pki/manpki/pki_paddingschemes.html
because me too use PKCS5PADDING, and was comatible. but no more.

Update: I found it. Now blocks are using optional IV in encryptation process.

Internal algorithm is changed by them from AES ECB to AES CBC. Now it’s working for 128 bit. It’s not working for 256 bit

What is optional IV set inside?

Does anybody know the IV (=initialization vector) in the meanwhile?