PS:Look at the edited post, it doesn’t require that

nice task!
this seems to work

Edit:
ok in this case it works so far

if the order of his list is different, the result will not be (watermelon, beer)
exemple:
List2: beer, watermelon, grapes, pears, apples
result: pears,apples

Ok so I solved this. I actually went one step further and made it full duplex, so that if there is something in list2 not in list1 it will e identified.

I tried a few different ways, but this was the only way it would actually work. I have created two lists and the result I am looking for is (watermelon beer cheery). Watermelon and beer is unique in list2 and cherry is unique in list1. Lets see how I got it. 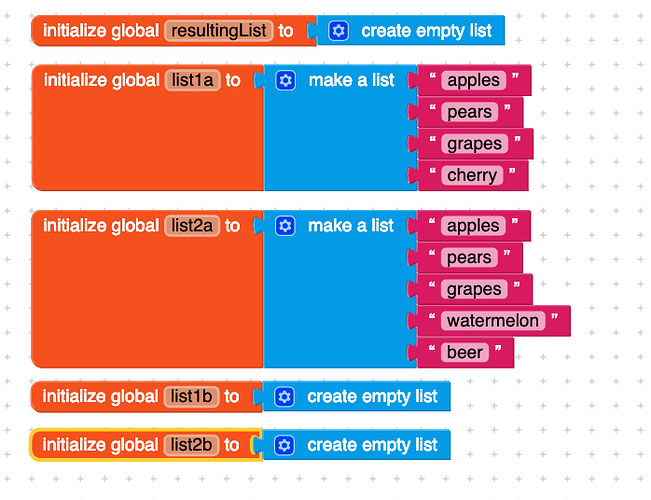 Create a function to do the analysis. and copy the two current lists to their temporary lists.

Create a for loop. We are going to step through list1a items and see if they are in list2. But we are going to analyse list2b so we can manipulate it.

Lets setup a local value for the index number. Then each item in list1 is looked up in List2b. If it exists it sends a True. Based on the true, we then get the index value from that item found in the list. Once we have the number, we then remove that index number from the list.

Append the result to your final assembled resulting list

The result here is as we expect.

You forgot to cheers

I finally got it too

2 Likes
Compare two lists of numbers and create list with the numbers not common between them
system (system) closed April 27, 2019, 7:34pm #16

Continuing the discussion from Compare two lists and create a unique resulting list:

See if this helps . If you wish to sort combined number list follow @WatermelonIce 's example as I did

Hi guys! Just share a way to arrange a list without an extension. I found this link from this post: This is using the method of bubble sorting (Bubble sort - Wikipedia). Here is a gif from WIKI explaining how it works (sped up for better view) [Bubble sort] Let’s get started. Blocks you’ll need: Three global variables [Global block] Procedure block with three input [Bubble sorting blocks] Explanation: We need a procedure block with three input and return result [1] listToBeSor… 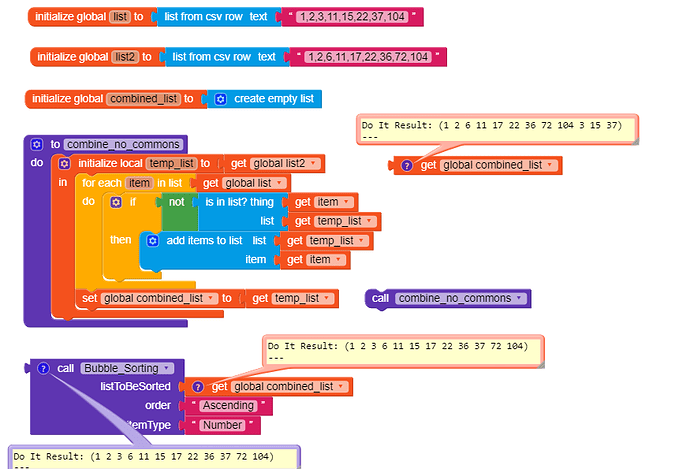 I am getting the error I mentioned for the same blocks.

I used these blocks

I finally got it too

Does it work now that you changed them ?

My app is crashing due to some other reason. I am working to solve that first. (I guess its related to using two firebase realtime database url in the same app. I’m not sure if its possible, but my app worked initially but now unable to fetch data from the second project.)
#beginner

I have a doubt I have two lists Now I have to remove the values in List 2 which are common in List 1 Both the list contans more than one item in them. Can you guys show solution?