Recently checked github. A full open source code is given by Evan, how copy paste can be implemented.

But Kodular said it is first developed by them. Instead of giving credits to Sir Evan.

Or it is totally different from that one? Wanna know

Yes, it’s a totally different one
In the Summit I showed our implementation, and then he told us that he had another one (which does not have all those things)
So, we proceeded with our current one, and we will migrate it to MIT once we ensure there are no more things

And FYI, he has published that branch just a few weeks ago, after telling him that we also have that, as we were discussing if adding it to the blocks editor or not 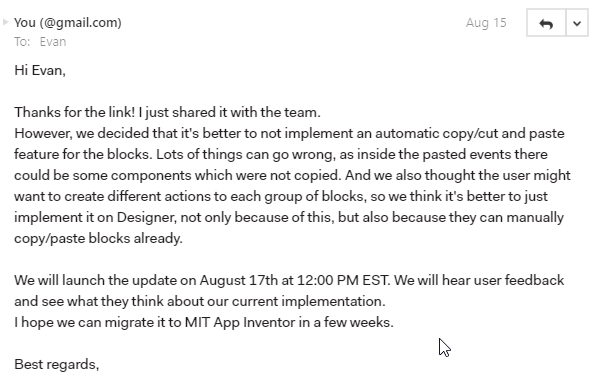 And also, his implementation has some bugs like you can paste non-visible components into visible ones, or a Map inside a Map, which should not be possible
So, it’s a total different implementation

he has published that branch just a few weeks ago

March 13 to be Precise

You can commit something today and push it a year after

Basically, because on the summit (Aug 2nd) he said that the branch was missing to be pushed, and he pushed it for us to take the blocks implementation, but then we decided to not add it as it was full of bugs
So, well done with SG, your projects can be easily corrupted now

Oh, and @Pritsceo and @Abhijith_Dominic, see when we commited it:

Thank you for clearing.

I was thinking, why Kodular implemented it with without giving any credits.

without giving any credits

Because we don’t have to give credits when it’s own work…
It is very clear that we added before Evan, and that it’s a totally different implementation