Custom Menu in Companion not working

It is working now. Did some testing with the add menu item

And this was the result in the companion app.

Also, to work with custom menu, blocks must be added to the when.Screen Menu Initialize action, and a Clear Menu Items block in when.Screen Initialize

You mean like this? If i do this no menu appears. Just the about option is visible. 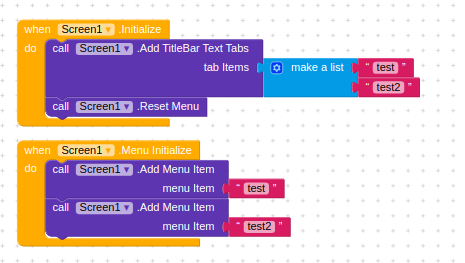 The “Menu Initialize” and “Add Menu Item” blocks are correct. Can you try removing the “Reset Menu” block? I think that might be getting called after the menu items have been added, thus removing them.

If i remove the reset menu block i get a menu where it says community, support and about application. But not the options i wanted.

The only time it is working ok is when i put everything inside the screen intialize block and do:

I’ve just done some testing and it looks like the menu items don’t seem to be adding to the companion using the initialize blocks. You can, however, right click on the “Add Menu Item” block and click “Do It” and this will show the menu items in the companion.

It works like that yes. I tested it with an apk and there it is working.

Check this may help