Extension Limitation Is Against Kodular's Promise 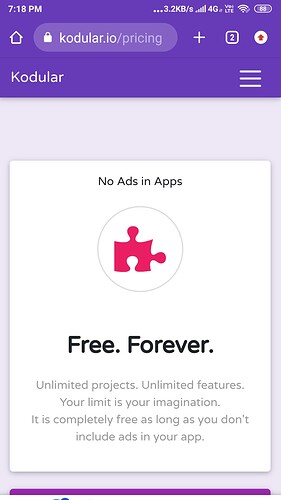 There are many users like me developing an app from 2 to 6 months and when it comes to accomplishment all the dreams got wiped out by limiting the extensions.

A nice app cannot be created using 5 extensions & your enforcement to limit extensions (distributed freely by extension developers for good cause) is improper and not justified.

If extension developers who bear hardship to develop an extension to add a feature in app don’t ask for money then why Kodular expect us to pay for that, it is not right thing at all.

What can anyone do about it but complain? Kodular have said they may increase the limit soon, but they are under no obligation to do so.

Also, there are hundreds of posts about this issue already. Why did you decide to spam the forum by creating another?

Instead of blaming. Accept the fact. I know they broke their promise but what if you’re in the same place.

You want regular updates, no bugs and huge earning but you don’t want to pay even a small amount. (This is going to implement from now, understand my words before pointing it out​

You want regular updates, no bugs and huge earning

I’m not spamming the forum. I just can’t digest one thing if extension developers offers the extensions for free then why do kodular team want me to pay for that & as you said about updates & bugs that they fix in kodular not in extensions!

People love coding and they do this because of their love and kind nature. Companies are not like that.

Also my dear friend, not all extension developers make extensions for free. Most of their extensions are free but not all but exceptions are always there!

Note this as well - Kodular is not charging for the extensions. They are charging for the number of extensions you use in your project. Everyone do this, they keep few things free and make rest of their features paid. This is called freemium model

Companies are made by founders & managers but survives by people, people who trust & have faith on services. There is no wrong in earning, & I won’t argue if the extensions are paid in nature or owned by kodular. The extension developers are equal to kodular, they’ve put their efforts to make kodular apps to compete android studio made apps but unfortunately the efforts of extension developers are going to be wasted! Will kodular pay them? If yes then I have no objection but if they take advantage of that (good cause) then it is a big misfortune for me for you & for all!!!

There should be ethics in every business, because companies survive by people, their faith & trust.

I’m again saying this for the betterment of all kodular ought to remove limitation for using the extensions & premium should only be applicable for monetization.

Yes, but there is no point in complaining. Migrate to premium, leave Kodular or just accept the new reality.

You want regular updates, no bugs and huge earning but you don’t want to pay even a small amount.

But not to students