I have a horizontal scrollbar in my browser. My screen is wide enough, i can see everything but i can move the builder screen to the left. Was this scrollbar there before the latest update? I cant remember. It has no function or does it? 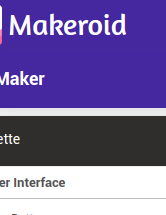 What happens when you try to clear your browser cache?

@vishwasadiga. Can you take a look at this?

Hi there!
Have you zoomed in or out? How long has it been since this error has begun showing? Also, does the same happen on other browsers?

Just in Chrome. In Firefox and Opera it works ok. I have zoomed in and out and the scrollbar stays.

Have you tried clearing the cache? Try opening the page in incognito mode and let us know if the problem persists.

Cleared the cache a couple of times. Still there. Also in incognito mode.

Okay. I think I’ve figured the problem out. We’ll bring out a fix in the next release.
Keep Makeroiding!

Surprise. Today my screen looked like this. Is this also fixed with the next release?

Look at the component block on the left side. After a refresh of the screen it was again on the right spot.

@vishwasadiga is working on that too.

@Peter is the issue fixed or still there?