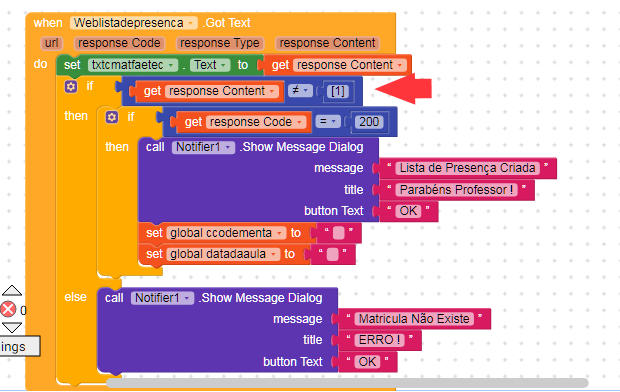 This image I divided the if into 2. In the first one was an IF with AND.

Yes, I used IF with AND comparing 2 alternatives

This is the app screen

It didn’t work either …

And finally after 6 hours …
it worked … but this solution already gave me problems in another app. The use of compare text, did not work in another situation and today (I did not expect it) she who solved.
Sorry, I do not know if it was to post because it was resolved. But I don’t understand why 2 identical strings are being compared and return FALSE.
I NEED A BEER !!!

" and ” aren’t the same character.
Make sure you are using the correct one.

What do you mean, “It’s not the same character?” It didn’t just happen with AND. Note that I divided it into 2 IF’s (wrongly). I first tested one condition and then the other.

Yes. The content “RESPONSE CONTENT” is of type JSON because in the PHP script it has
----> echo json_encode ($data);
And in the KODULAR block itself I print “RESPONSE TYPE” and show JSON / TYPE

What do you mean

I was referring to the quote characters not the and.
There are multiple characters that look like a quote but they are different when comparing.

I was just trying to mention 1 possibility as to why your Strings didn’t match even though they appeared to be the same.

But, did you see that I could solve it? But the point of this topic is that I solved, but I don’t know why IF doesn’t work. And I didn’t see the logic for the other attempts not to work. Now does it work? Yes it works, but the next time I need a SIMPLE “If” I will not know if it will work and how it will work … understand my concern?

Did you try json utilities extension to get array from json.

“Try removing square brackets in logic equal”
This I know I can not do because I know that the return of the php script in Json format, brings 2 square brackets. I already posted this solution in another post here in the forum.