Yes.
You should not use PlayCore library related components like InAppUpdate until Kodular updates the library to version 1.8.0+.

Somehow its not working, am i doing it correctly?

Update This Extension Not Working On Fenix

How to fix this

[banner] Rush is a build tool, built to be a complete replacement for the existing way of developing extensions. It attempts to improve the overall developer experience and reduce the amount of boilerplate code you need to write to make extensions. With Rush, you no longer need to use annotations to define your extension’s metadata and Android manifest tags. Instead, you get a separate metadata file, rush.yml, and direct support for AndroidManifest.xml (more on that below). Not just that, Ru…

its works ok here.
i put a (IF IS IN COMPANION) to dont call the REVIEW to avoid crashing when testing.
after published my project, all works ok.
Thanks @sonumohammad333 for this amazing extension.

Really amazing. Thanks so much!

I just want to ask is there a way to check if a user has already been asked a review, now I have already made blocks to do that, but I mean in the case where a user installs and uninstalls the app etc. in a very short amount of time, in order to comply with the quotas. Otherwise still really great

You can use tinydb if possible.

True, I’m looking into using the web version. Thanks

Or use Rush to build the extension!

Thanks for this great extension. Dear @sonumohammad333 are you considering to use this method so some will overcome this playcore library issue? Is it difficult I dont know but If you can do this everybody will appreciate your efforts. Thanks in advance mate.

You can use tinydb for that

in the case where a user installs and uninstalls the app

are you considering to use this method so some will overcome this playcore library issue?

I am not using Kodular for so long and not making extensions.
The extension is open-source, anyone can compile the extension with Rush.

not work for me.

If the user reviews the app then store a value in TinyDB. If that value us present then don’t ask them to review it again.

You ask the user to submit a review.

If they submit the review store “1” in a TinyDB tag “Reviewed”.

Next time check “If Reviewed = 0 Then ask user to submit review”.

Can you check please 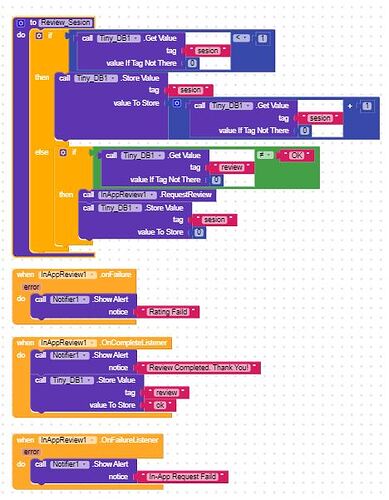 I would just do:

In the OnCompleteListener you can store “Ok” in TinyDB review

Hello !
Nice extension !!!
Very usefull but I am asking some questions :

and last question, Just before, I can see blocks but I have not the same with AIX file (post 47). I have only them : 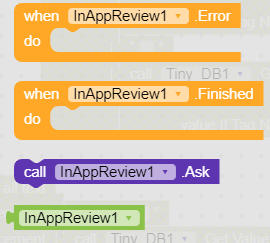