this will be the first time making some kind of contribution to the community… hoping it’s not the last so please go easy on me if I say something that it not very accurate, and of course make sure to correct me.

This depends on the same good old overlapping trick and some precise animations to position the screens in the write spots to be accessed on a button.

this it what it will look like when we’re done

You will need two vertical scroll arrangements, one being the main screen the other one is the secondary screen.

you also need two buttons on each screen to switch between them.

a good idea is to set the background of the second arrangement to a color -or white- just don’t keep it invisible, *unless that’s something you might find useful in your apps

You will need one extension called “TaifunTools” you can download it from here: App Inventor Extensions: Tools | Pura Vida Apps

this is an example of what it could look like (the .aia file is last thing below if you think you’re lost)

First we make the size of the secondary screen became the same as the whole screen, and then make it overlap using what this amazing man explained with the decoration block:

How to overlap components? Guides

Just the same old overlapping** but with the decoration component** I’m just updating the old Shreyash’s AIA , Cuz i thought that it’ll be easy to catch-up with: What are the improvs you’ll get uing this method: 1. syntax is easy 2. simple to implement 3. So called “gap problem” will be resolved( for good ) Implementation: 1.Use a parent arrangement 2.place overlay under your background arrangement 3.just simply implement the blocks as i have W.R.T.your project. [blocks (4)] Overlay…

then we extract the exact screen width using TaifunTools .Density block and last but not least we move out the way with the animation utility tool 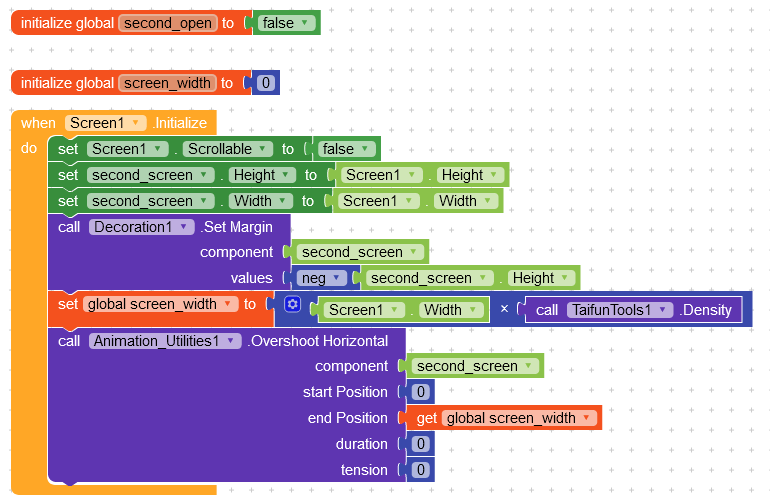 and just like that everything is ready to animate whatever style you like you can do
and to make the IOS style you just do something like this:

Nice @Baraa_Awwad The transition is very smooth are perfect

Really the screen transition by arrangement is awesome & perfect too…

thank you for using the tools extension

thank you for using the tools extension

Such an amazing tool to say the least