Hangman is great, it teaches you that by saying wrong things, you could end someone’s life…

"Hangman is a paper and pencil guessing game for two or more players. One player thinks of a word, phrase or sentence and the other(s) tries to guess it by suggesting letters or numbers, within a certain number of guesses. "

In this game, you versus the app player, the game will think for the word and you have to guess it.

In this game, there are three different lists of words.
List 1: Shapes consist of 50 words of geometric shapes.
List 2: Creatures consist of 118 words of animals, insects , etc …
List 3: Cities consist of 172 words of countries capitals.

You as a gamer, should choose which list to play with and then try to guess the missing word.

Strategy:
The fact that the twelve most commonly occurring letters in the English language are e-t-a-o-i-n-s-h-r-d-l-u (from most to least), along with other letter-frequency lists, are used by the guessing player to increase the odds when it is their turn to guess.
Another common strategy is to guess vowels first, as English only has five vowels (a, e, i, o, and u, while y may sometimes, but rarely, be used as a vowel) and almost every word has at least one. 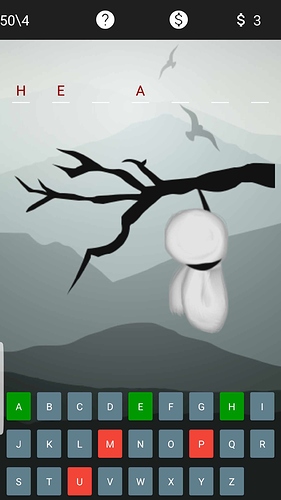 Any comment(evaluation - idea - etc …) is appreciated.

Just know the graphics owner. Graphics credits goes to pixii bomb.
Thanks to @aravind_chowdary_in for his mention.

Original was made by pixii bomb

Here is the tutorial

Make sure you credit the owner.

What happens If he won’t ? Will google suspend that app ??

I can’t surely tell that app will be suspended. But, may be… and stealing others work on name or yours is not good… I think !

I’ll add this to info. I’m sorry i just found the aia in some where, I just use the graphics. Thanks for your mention