Hello there, i was wondering if we can make a launcher application.

Can you tell more about this ?

reply in one of the old topic.

Is there any way to create Keyboard application? Discuss

You can certainly create a keyboard to use in your application, but you won’t be able to use it outside your application, as a phone keyboard. With Kodular and all appinventor distribution, you can create almost everything, but only in your app (when the app is open). So it’s impossible to create keyboards or launchers …

a launcher isn’t an app ?
if you shutdown a launcher you cannot access to it right ?
why is it different for kodular applications ?

Yes it’s one kind of an app you can say, but it involves many complex things which are not yet possible in kodular. Some of these things are listed in form of screenshot below 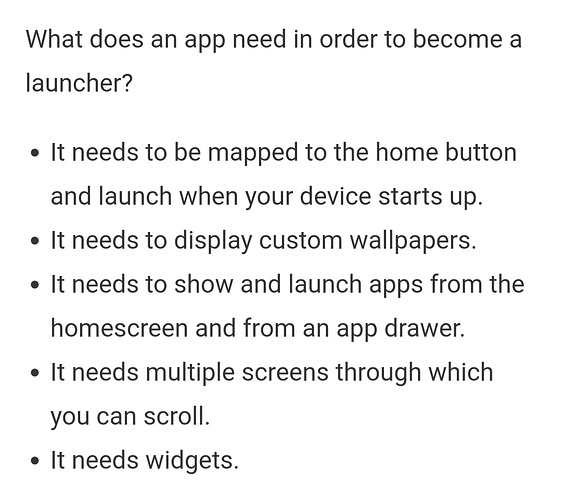 Hope I am able to clear some of your doubts

clearing some doubt but some other questions comes to me …
With this limitations i can make my own launcher that focuses on my needs ?
No other constraints instead those listed in your post ?
I don’t need widgets (i don’t use them), don’t also need multiple screens (no space on my phone so 1 page with folders is sufficent XD)

No, you can’t make a launcher application in any App Inventor (which Kodular based from) distribution in any way. Launcher app needs to be run in background and launch when device boots up which App Inventor can’t do.

App Inventor apps can only run in the foreground at the moment. This is one of App Inventor limitations. App Inventor needs a major redesign for supporting latest Android features and background services as Italo said:

I understand it will take a MAJOR redesign of the App Inventor system to be able to have background services and that is not a priority. If some day, someone decides to re create it from the ground, it may be able to have that feature. This is the official MIT announcement about why it is unworkable at the moment: [image]

Because App Inventor still support first releases of Android (< 4.4) which is not used (~2% of people) anymore. So it only provide features which will work for all Android versions.

it will not work with startactivity component ?
There is an intent called LAUNCHER, cannot use it for what i may want to create ?

Nope, it is for launching another app as its name says: Start an activity