I have imported my app from Thunkable and editing in Kodular.
Unlike my other Kodular projects, the app I’ve imported from Thunkable takes a lot of time.
It even makes errors when I do something else while Kodular is loading my project. (internet, video…)

Other similar topic says that it could happen when it is the first time to access the Creator after the update, but I edit my project in Kodular almost every day, and it is happening all the time.

I already deleted components which only exists in Thunkable.

Am I the only one to see this issue?
Or is this my computer’s problem? (My computer is a laptop)

You can use Firefox browser, Kodular runs very fast and without lag in Firefox.

@yusufcihan I thought Chrome is the only browser that works for App Inventor distributions. Was I wrong or is it a special thing for Kodular?

chrome ism much much faster as firefox , in firefox i have no chance to work in block editor

Firefox works with full performance. No it is not special thing for Kodular. I have no lag with working my Kodular project which has ~3500 blocks in Firefox. But in Chrome, I can’t even scroll page.

I have imported my app from Thunkable and editing in Kodular

The best thing to do is to make the project from scratch then importing it from other builders, since there are so many things that are different and not only the components that doesn’t exist, but even the code behind it.

@Boban So is there any solution to my problem?
I understand your reply but it has been a while since I imported this app to Kodular, so I don’t want to just go back to Thunkable and edit.

Not for me ! Chrome is more fluid, but with 3 seconds freeze every 10 seconds. But with firefox, i have less FPS, but i never have freeze

I have to wait 10 sec if i click on a elemt before i can move it in firefox, in chrome it lags but you can work.

So is there any solution to my problem?

Not what I know.

How much RAM do you have ?
I have 12GB ram (8 at the beginning but i’ve buyed 4 more mostly for kodular 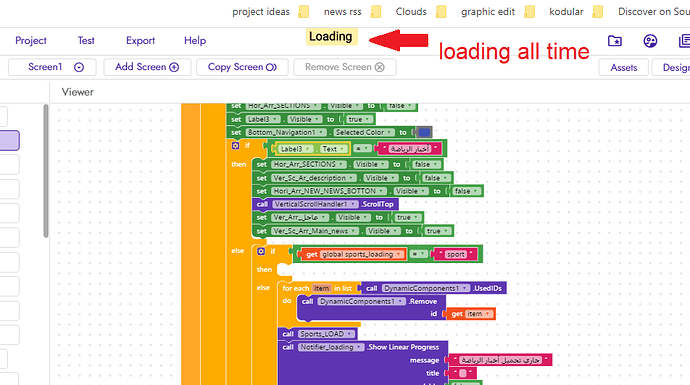 loading952×532 75.2 KB
Loading message appears for a very long time
When I close my browser, I lose a lot of work, I cant complete the project

Maybe it is related to internet connection and speed.

Maybe it is related to your internet connection and speed.