Peoples, I just saw that in the 1.1.3 update I brought something I wanted, the function of creating a directory in the file component, I then ran to use it, after exporting the application and installing it in my mobile application to simply, I do not think the problem was in the file component because the error happens soon in the first screen, where I have not modified anything since I launched the last update, and from experience I know that one screen does not influence the other in question of errors, the error is only discovered when the screen with this error is opened.

here is my AIA:
Text.aia (2,7 MB) to an incomplete function, just the function I’m testing in the application, which creates a directory for Backup.

Here are the only blocks I used after the update, yesterday I released the last version of the app that is working perfectly, so the problem came from yesterday to today. 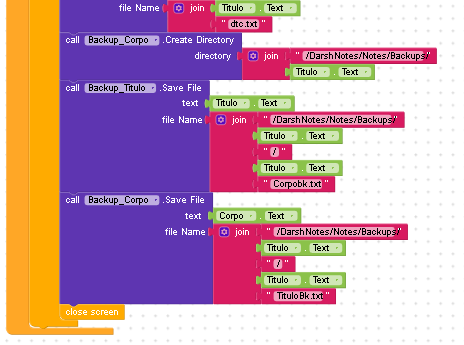 Note: The application was imported from AppyBuilder but was working after the import.

Use the create directory together with the new Event for it

I did this, but the application keeps stopping. 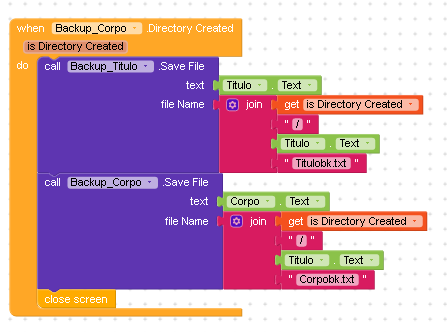 Because you did not switch/close the screen correct.

Too you should use the variable first to check if the directory was created or not.

“is directory created” returns true or false.
You use it in the wrong way.
Read the block description first before you use something new

I found the variable to inform the directory path.

Look what I wrote avove

Sorry, it was a translation error, what I wanted to say was:

But even with all this the application still stops, do not you think that if the problem were this, the app should display a runtime error instead of stopping?

Oh, and if I understand you ask to, first check if the folder was created and if it was created carry out the action, it’s like so? 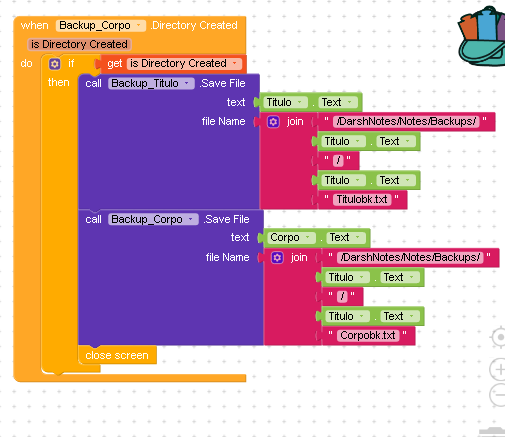 Yes now it is half correct.
Now close the screen in the correct way.

In what way? I have always used this method.

Keep going, I did it on both screens, but it keeps stopping as soon as I start.

Yes, on the first screen, the list where the user annotations are.

But I just did a test with the New Launcher activities widget and the second screen also stops, and it has no listview.

how? there was a question here, were asking if I use ListView, it disappeared!