Hello,
I have a JSON file with this structure (“key”: “value”) and I would like to read it and create a dictionary

I have read a lot of topics about this and test all methods that I’ve found but i’m unable to parse it correctly.
Can anyone help me please ?

Is this json file is stored in your assets or in the storage.Or you have it in a varibale.
Any way this extension would be useful:

Hi @WatermelonIce…Until kodular adds this block to the web component, I created this extension that parses json to dictionary like the block in app inventor… Please test if it works … (of course this extension is only for those who wants to use the json text decode with dictionaries block while it doesn’t exist in kodular…And not a new something so i posted here and not in a new thread) : That’s an example: [image] With app inventor: [image] [image] Download link : io.mohamed.JsonToDi…

You can use the file component to get the text (external storage use single slash, assets use double slash), then use @Mohamed_Tamer’s extension .

Actually, I’ve already read this topic and tried this extension with the file component.
But the result was not good

The JSON file is in my assets.
My goal is, at the first run, to read the json file, put it in a dictionnary and store the dictionary in TinyDB.
On next runs, only have to get valur from TinyDB.

Thanks for your help,

Here’s how to use the file component to read json and then parse it.:

Actually, I already have a solution that works but each time I need a color I go to read the file.
And I think this method is very slow as the app has some lags.
So this is why I think that loading the json at first run to a dictionary stored in TinyDB should work better.

I have to reduce the read access, so I try to find a solution to read in memory (except for first get value from TinyDB) 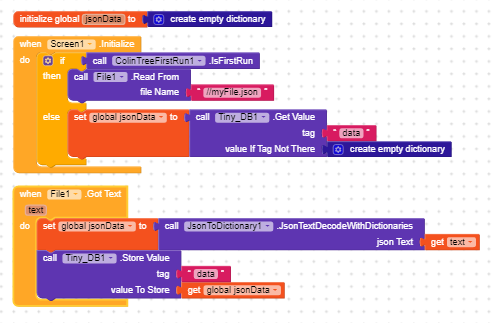 Actually storing it in a variable is a good way instead of JSON file in assets. 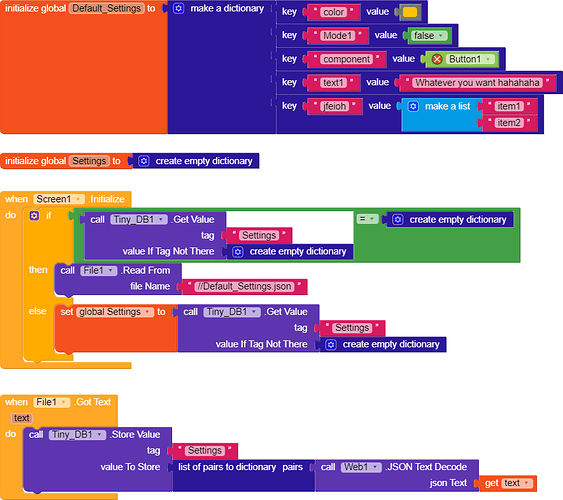 The first block is not necessary “Default Setting” Variable.

It might work, but the extension provided by @Mohamed_Tamer is the best for parsing Json text to dictionary.

Hello guys,
First thanks for your help

I’m back after doing some tests.
Actually I’m facing (I think) an issue.
It seems that storing the dictionary to TinyDB takes some times and if I try to get value from it just after, the get value return nothing (maybe still doing the store value).
It is the same if I set my variable to the dictionary given with JsonTextDecodeWithDictionaries.

I put a timer to call a procedure that set the second variable and it works, but not with TinyDB method (that seems longer than just setting variables)

Blocks seems to not be executed sequentially…

Can you send out the code?

I just tested with the variable method (which I suspect to be quicker than getting values from Ressource Utilities component) and it is not quicker at all. I tested on my old Motorola Nexus that is very slow.
So I stay with my initial work

By the way thanks for your time