I’ve downloaded the new Companion version 2.1.0, but when I try to open it, it just closes and gives me a message: “Makeroid has stopped”. Is it happening with you?

Are you guyes sure that @Diego really have updated the companion?
When I read the release notes then i see a text with the words, that he want to do this, this week. There is going to be a second release! During next week, we will release the version 2.1.1 with some minor changes, as we hadn’t time to implement for today For example: Update translations Update Companion version (use latest HockeyApp release)...

The companion page says 1 october but version is still 2.0.0. If it was an old version it should work as it was but it doesn’t. 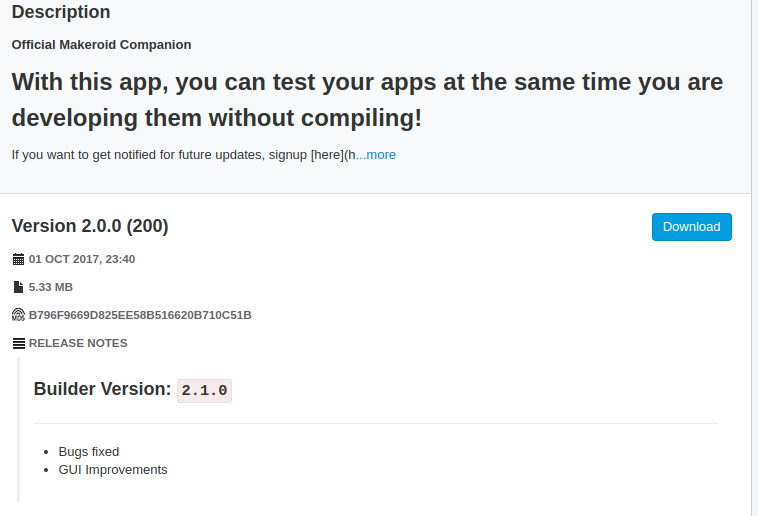 Yes i see. But i dont know why.

Thanks. Now i see why it crashes.
@Diego did forget to do change this for the companion:

OptionMenus must now be added with a ‘make a list’ block. Remember to update the blocks in your apps using this function created before the update.

(copy from the release notes)

The companion page says 1 october but version is still 2.0.0. If it was an old version it should work as it was but it doesn’t.

But the Companion doesn’t work still though. I’ll try to fix tomorrow or Wednesday

Don’t worry!!! We can wait with no problem.

Hi is the companion working yet?