I tried the following code in Thunkable together with the QR extension and it works. I wanted to make my first app in Makeroid as an example to add with my tutorial.

The code bellow in Makeroid gives alwas the error “Did you enter a text?”

@Mika, any idea why this happens in Makeroid. And yes, there is a text in the Textbox.

Does the example on my blog for you work how to use the extension?

I can not load your example in Makeroid. See my other post.

Yes but i think you find a picture on my blog how to use them.
Or try one other thing:
Load the aia in thunkable from my example and make a screenshot how thw blocks work and then create the blocks in makeroid.

I dont have time to create a example for you.

I did that. I exported my app from Makeroid to Thunkable and there it works. So something is not working in Makeroid.

I will check it when i have time.

Thanks. The only thing i saw was an error message when i imported the aia in Thunkable. It was something about a form 27 which should have been 20 or something.

Yes. Our version is higher.
As i said i will take a look when i have time for this.
I have current a lot of work to do that we have new components

I tested some more and got it working now. I just deleted the if-then-else and it looks like this now.

I used Taifuns Tools extension to get a gallery refresh.

@Peter
There is a bug in the extension. I can confirm that.
But dont worry…

That’s great. Really love all the hard work of the team.

We all give the best we can do, to create the best app builder for everyone

And i think we have no competitor

I tested the QR component and i still have to make code without the success option to make it work. See above in this topic.

And then please do following:
Show me your screenshot after you click on button 1.
Then make another screenshot and turn your device into flight mode.

The component knows automatically if there is a connection or not when you try to run the function.

For me it shows following with internet connection ON

And this are the used blocks: 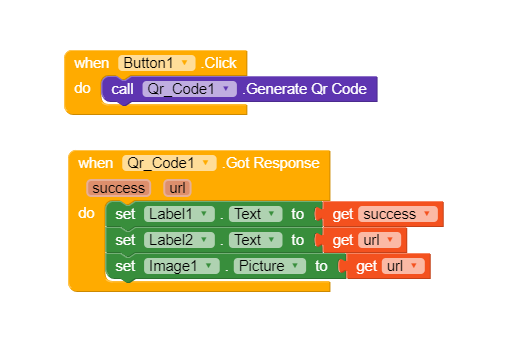 And please be sure you allowed the app to use INTERNET permission. 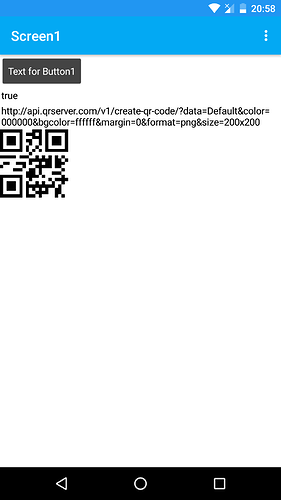 So you see it works and the success state is correct.

Why doesn’t the code in the top of the topic doesn’t work then?

The test apk uses the qr code component and not the extension.

I know what i did wrong. I thought that there should be an error if i have a empty textbox. But it doesn’t work that way. You get an error if the server can’t be found. I tested it with my own program and it works, you have indeed fixed the component.

Sorry for my brain fart.

If the text is empty and not set, then the component uses the word “default” as value.
So we got no error.

Yes you are right, success is false if there is no connection to server.
@Peter I have now updated the extension too on my blog.