What is the name of your app?

A simple app, where you have the emergency and services phones, to dial faster if needed. Just usefull to my town. 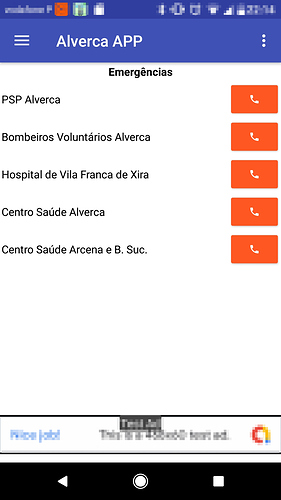 I had some problems when add the invisible components to make a call, due to some Google policy retrictions. now with activities it worked fine.

It is an interesting idea, specially for old people and children.
I didn’t download the app but it looks like you could add the option to call using microphone + google component. The user open the app and say, in local language, where they want to call.
If you want you could improve it even more and if the user say the word police in a phrase you ask confirmation “call the police?” and if the user confirms you redirect to the apropriate number or ask again. This way you could make the app very easy for children.

PS: Are you portugues or what? I noticed your screenshots are in portugues. I ask because I am from Brazil.

You should change the idea a bit, create an app like flashlight or anything and than integrate this emergency feature in the app , like if user tap more than ‘n’ times the emergency windows opens and he can call or even send his location via simple message and WhatsApp.
I used this idea in science exibition , audience got impressed but judges cant understand it​

Another great idea, but why did you answer my comment instead of answer the topic? A mistake?

Yes , sorry, I was in rage to share out the idea​