Before in time, in my other apps, I set the Interstitial only one time with a clock (60000ms) and it had been repeated every 60 seconds.

Now, I set the Interstitial with the same options in the clock and in blocks but it is shown only one time (before 60s).

I need to show the interstitial every minut, how can I do it? What I’m doing wrong?

Show your block so that I can understand why its not working.

Its against admob policy . Place ads with timer sounds irritating. If you do so google will disable your account…

Dont tell him correct blocks . He is posting question again & again. Without making a search i request moderator @Peter
please have a look into this matter.

I made the search but i did not found the correct answer. Sorry if it looks that I’m double posting.

The blocks that I have are:

Load the Ad on Clock timer and show it When Ad Loaded. Make sure you’ve set clock timer as Always Fire.
Timer gets enabled on screen initialize.

I need to show the interstitial every minut,

Why? Who would want to use an app that does that?

But according to Google admob this is a police violation, thi is not a good way to show interstitial ads

according to Google admob this is a police violation, thi is not a good way to show interstitial ads

And a few members were shouting on me saying that there is no such rule!

Now I have configured my blocks as you have told me and the ad appears every 60 seconds.

But I have a problem: The ad shows just when it loads, just when you open the screen.

How do I configure it so that, once the screen and the ad are loaded, the ad waits 60 seconds to be displayed?

I hope I explained myself well. 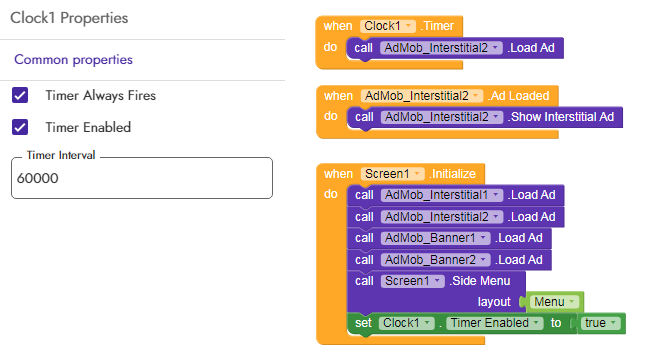 Edit: I think I have to erase Load ad to screen initialize, I’m going to try.

Edit2: Ok I erased the block Screen Initialize - Admob_Inter2 Load ad and now it works how I wanted.

Thanks to all of you for your help