Showing rewarded video only once

I’m currently working on adding rewarded video to my app. Everything is perfectly working.
The basic idea is that when the game is over, but the player wants to continue, he/she will have an option to watch the video add. After watching it, he/she can continue playing his game + additionally, he/she will be rewarded by adding extra score points.
Here are some blocks: 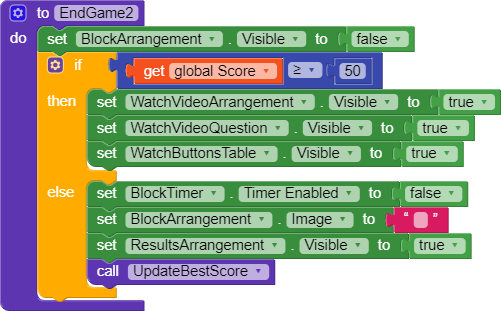 However, my problem is that I want to show the add only once. So when the player makes another mistake, he won’t get a possibility to see another add and again continue. Could you please advise me on some way how to do it? Is there some tool that prevents showing the add if it was already played during one game?

You can use a Variable with initial value 0

if Value of Variable = 0
then - Show AD and Set Variable Value to 1
else - Show Notification that the Player has already used the Chance. /GameOver.

From the above Blocks,
if the Player makes a mistake for first time, he will be shown the proposal to watch AD and continue.
if the mistake is done second time, then GameOver.

Thank you very much! It worked