Today i was trying to update my app after making little changes to it, but whenever i update it, it does not install and give error “App not installed”. When i remove old app from phone and install updated app, it gets installed. How?

after making little changes to it,

What kind of changes did you made

What may cause this

My changes were related to ads, updation of app icon and splash, updating version name to 1.1 from 1 and version code to 2 from 1, that is it

Pixel size of the icon image

Boban, i figured out where the problem is. Actually signatures are different in both, that’s why this issue is coming. How to modify signature in current app or kodular?

Actually signatures are different in both, that’s why this issue is coming. How to modify signature in current app or kodular?

The first question should be why they are different.

My app has been hosted in someone else’s playstore. I dont know if he has done something.
I also dont know from where that signature came?

I also dont know from where that signature came?

I spoke with that guy, he said, how can i change your keystores from apk?
I have given him correct file, he has uploaded it as it is, then how playstore is showing different key?

then how playstore is showing different key?

Do you mean why playstore is showing different key?
If so, which Kodular account did you use for the first release in the Play Store?

You are wrongly suspecting the issue. You think i have multiple accounts and i forgot through which of them i have uploaded app.
I have only one account.
Let me again briefly clear you the issue.
I created first app with keys, say ABC, and hosted in playstore. I created update of app and replaced previous app with new built whose keys were also, say ABC. When i tried after some days to update third version, it was not updating because keys were different. I checked the installed app on my phone with last updated version on playstore and when analysed using third party app found key to be XYZ instead of ABC

I do not understand what your friend and his account has to do with the matter.

So again the question: Which Kodular account and which Google Play Console were used for the releases in the Play Store.

And every time you did a Play Store update, you sent your friend the APK you created. Is that correct?

Yes, i have already said that in example

i have already said that in example

When i tried after some days to update third version, it was not updating because keys were different.

So your friend - and not you - did the update (uploaded to Play Store) and obviously the error is on his side. Maybe he has enabled “Google app signing”.

Third version has not been uploaded to playstore. After giving output, i was updating it on my phone directly, to test if everything is fine. 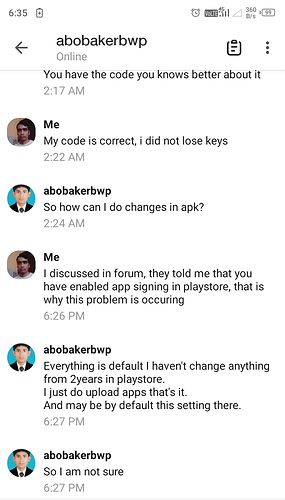 Then ask your friend to download the first, 2. and 3. release from his Google Console and send it to you. The names should be: 1.apk, 2.apk, 3.apk.

Now unistall your app again, install 1.apk and then try to update with your APKs (that you have saved on you PC).