Typically, Android and Java library developers publish their libraries on maven repositories (i.e: MavenCentral), and by giving out its compiled jar file. This makes it simple for developers to import the library into their projects using a java build automation system, which provides built-in capability to resolve dependencies, such as gradle or Apache maven. Unfortunately, importing libraries when developing an extension or component for MIT AppInventor or any of its distributions is limited into using its .jar file (and additionally .aar and .so library files for components).
So, using the maven artifact itself is in fact impossible, unless by collecting and downloading the dependency library file as well as all of its required dependencies one by one, which is indeed a lengthy process and could eventually result in missing libraries, causing a NoClassDefFoundError or compile errors, another option might be to download maven or gradle to build the libraries, although, getting the library files is typically not trivial, since this tools are mainly designed to build java projects, not to work as a dependency resolver. 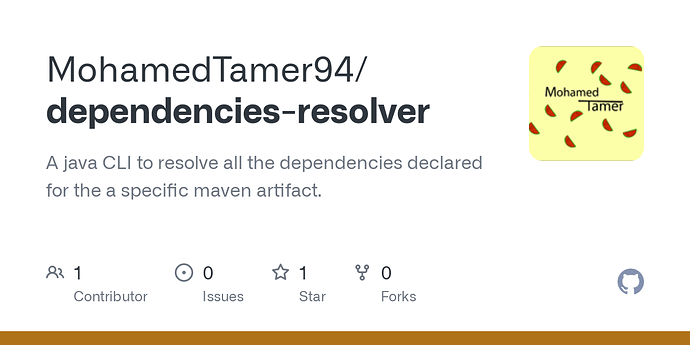 GitHub - MohamedTamer94/dependencies-resolver: A java CLI to resolve all the...

This library is still under beta, it may not perform as expected in some situations, please let me know about any bugs, suggestions or feature requests by writing a post on this topic, or by opening an issue on github.
Cheers,
Mohamed Tamer

Probably you can just wrap this in a JavaFX application as CLIs can be often confusing.

Thanks, that’s correct, i will put it on my plan for this project on a next version.

I can see the amount of effort put into this. Great job!

I’ve been working on something similar lately, for Rush 2.0 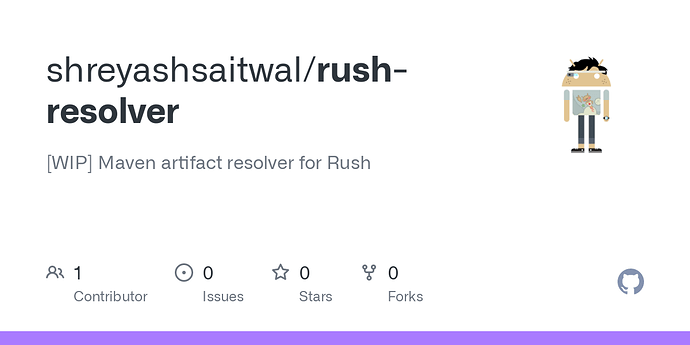 [WIP] Maven artifact resolver for Rush. Contribute to shreyashsaitwal/rush-resolver development by creating an account on GitHub.

I can see the amount of effort put into this. Great job!

I’ve been working on something similar lately, for Rush 2.0

A new version has been released

hey i just tested it but somewhy here is a result when i try to run it from my command prompt -
PS C:\Users\asus\Downloads> java -jar dependencies-resolver-gui-0.3-beta.jar

oh i just saw it requires java 11 2 but if the java version is not 8 then how we build extensions? 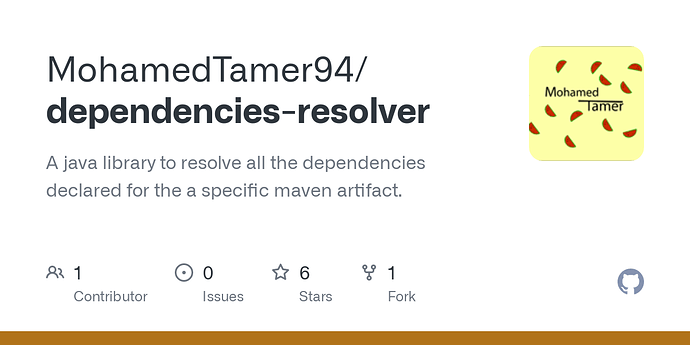 A java library to resolve all the dependencies declared for the a specific maven artifact. - Switching Between Java 8 and Java 11 · MohamedTamer94/dependencies-resolver Wiki

hi @Mohamed_Tamer so before starting that should i delete my old java jdk?

No need, if you are going to go with sdkman, then it should apply the java version you want to use to the current shell only, however, the java 8 JDK you downloaded would apply globally to other sessions.
If you will install it manually, skip installing java 8 as you have it already installed.

what to do after this -

Have you installed the zip command as in the first step in the guide above?

oh sorry i did not saw that will just do it

You may only want to install it in case you want to switch back from java 11 to java 8 in the same shell session, using the use command, if not, it’s OK, just install java 11 and when you are done with using it, restart the terminal to use your computer’s default java 8.

Maybe your previous java installation is conflicting with it, perhaps temporarily try to remove the java path from your PATH variable, restart the terminal, and re-run the command.

Great! Let me know if the program starts or any other error has occurred, for further development with java 8, either install java 8 using sdkman, or re-add it to the PATH variable.