The custom icon image of FAB do not appear while we toggle the visibility of the FAB.

So the setup of my project is as follows
The FAB’s visibility is set to false from the designer. Now from blocks when the screen initializes, the FAB is set to visible with custom image icon which we also set from block itself
Now I have 2 buttons to toggle the FAB’s visibility. As said earlier, when the screen initializes, everything looks good. The FAB’s custom icon is also visible.

But the problem occurs when I hide the FAB once and then again make it visible. At this time the FAB custom icon image is not visible/present 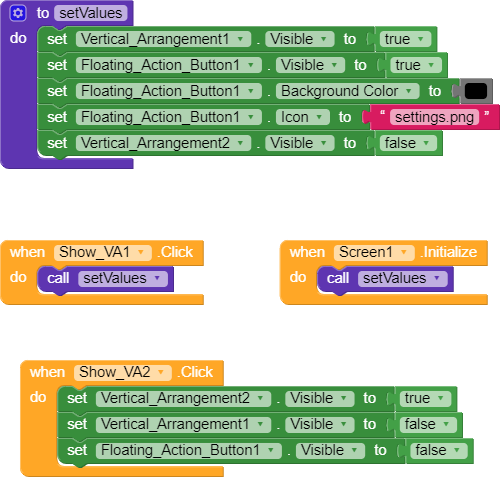 If any one want to test this, then

Below is the small screen-recording of the described bug

What happens if you assign a color to the icon when you make it visible? #FFFFFF

Tried that also but in vain. And I think this should not be the case(assigning color) because as told in the post I am using the icon image and that image is white. So it should be visible whenever FAB appears.

if you assign a color to the icon when you make it visible? #FFFFFF

Any update here? Is there any workaround for this? Or am I missing something?

Is there any workaround for this

Thanks @Boban. Your reply solved the above issue. But the same logic is incorporated in one of my project. But there this solution isn’t working. I am wandering why is this happening.

Anyways I am marking your reply as solution as it solved this query. But I need to solve the above mentioned issue.

Should I move this in #discuss category?

Btw, have you tried working with this blocks instead of visible true/false

Tried this not working