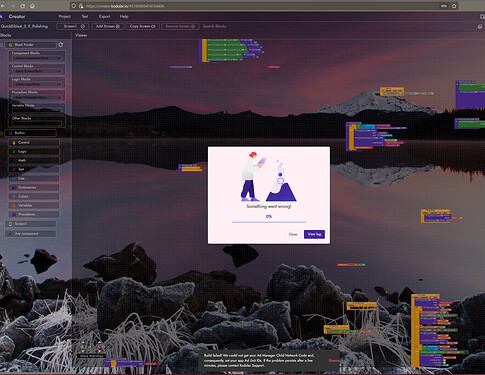 Please assist, I have been building my project for quite a while to almost completion, and I have come across this error as you see in the image above which I’m not sure how to resolve when I try to make a build of my app.
That said, I have searched the forums for a similar topic, and the only similar situation was for when there was not General Availability for Ad Manager, the solution was to sign up for an Ad Manager Account — which I do have currently. I have tried to re-import my app, same error. I currently have the 3 Kodular Ad units in my app (Banner Ad, Interstitial Ad and Reward Ad).

I’m only in testing phase and the ad units have been in my app in Test mode for quite a long time without any problem. They are also not placed in a way that they constantly fire off or annoy users — anything like that. This is an example block for an Ad failing to load:

I could be missing something obvious, but not sure what that is at this stage. Thanks for any assistance.

Is there already a solution to fix it?

No, I’m still having the error. I was investigating to see if it’s a problem with my Google Developer account somehow, but I see now other users are having the same issue.

What I do know is that it only occurs if you use Kodular’s Banner, Interstitial or Reward units. I’m not sure why the error is occurring between Ad Manager and Kodular. I’m hoping to release my project soon using Kodular’s Monetization.

Sorry, I have just pushed a hotfix for it. It should be working again.

@Diego please check my new app already approved by admanger i also need approvel from kodular? or not waiting for your replay