Don’t try to take my design either for your app, just for good sake, ask.

At the beginning of the video, it shows it behaving when the blocks to reset padding are enabled. Towards the end is when they’re disabled.

Stroke is to be set programmatically without any additional padding being added that is not set.

Stroke is set programmatically, but when Card is clicked to set Stroke and remove it, it adds additional padding that’s not in the code.

Below is where the bug starts, without setting padding back to it’s original value. 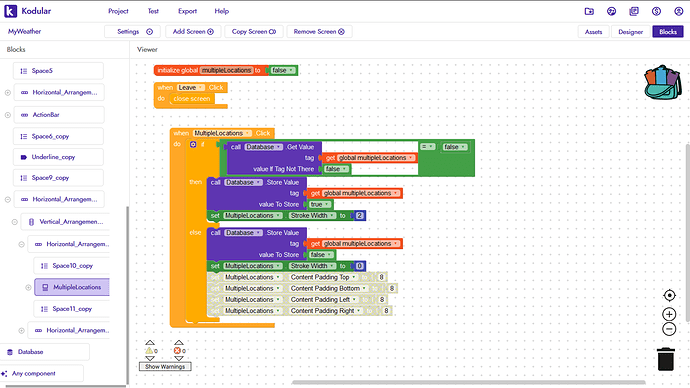 Never seen such bug.
Question:
Why does it work normal at the beginning and only later not after few seconds?
What did you changed in this time?

I mean all works normal on video start. After second 15 I can see the bug. But why so late?

I’d rather compare it to a before and after rather than an after and before, ya know?

To answer your question of what I changed at the 15 second mark… I just disabled the blocks that were resetting the padding to 8 in order to fix it.

Got it. So the bug is not at stroke block.
The bug is created by the content padding.

Looks for me like the padding is increased each time. But it should only be set one time and not every time again.

Correct, it seems to continuesly add additional padding to the card. Although it seems to be a set amount because I set the properties to 0 and tested it and it does the same thing it looks like. Kind of is a stroke issue because it’s because of the stroke that it adds more padding, but I guess that’s good enough