You are leading this to an off-topic discussion.

This is about the new file system.

Please, open another topic with your questions, complaints or requests.

I tried to test the new file system. First of all with the File component. As soon as I drag it into the Designer, I get an error message (Firefox & Chrome): Firefox: [grafik] Chrome: [grafik]

It is also not possible to click on it (same error) and there are no Properties / permissions displayed at all. The same after reloading / refreshing (browser) multiple times.

In addition the File component does NOT declare any storage permissions (with DefaultFileScope = App ) in the Manifest.

Unfortunately, my fears came true that the AI2 bugs were not fixed. It seems to be even worse.

since some of our projects have been broken I would suggest @diego to make a backup to an old Fenix 1.5.4 else all our projects and the work we have did were the wasting of time.

I am having the same issue. I had over 500 blocks on screen1 of my project. And over 70% of them are gone. I had an admob banner ad component in my app and was going to remove it soon, but now, I’ve lost my almost 1 year’s progress. Is there any way to open the project aia in an older version of kodular like 1.5.3? I hope Kodular can resolve this issue soon.

Every time when new update comes previously working component not work in new update,
i suggest kodular team to please cross check all features & component are working perfectly before new rollout. as we are working hard in this platform considering Kodular is part of our Carrier. because these things are very irritating.

Yeah, sometimes I feel as they don’t follow the simple rules of development as every single app developer should do:

Yes it is a very serious issue that needs to be addressed.

I’m afraid that all projects containing the File component opened after the new update (Fenix 1.5.5) will be corrupted beyond repair.

So I strongly recommend making a backup of the project beforehand!

2 Likes
All my projects which use File Component are broken due to this new update
Camera - Error 201, the camera did not return an image / missing Pictures folder
Boban (Boban Stojmenovic) June 27, 2022, 8:44pm #25

will be corrupted beyond repair.

Why do you think that

Counter question: Do you have an argument that speaks against it?

(The blocks are mostly gone or incomplete… Will they be automatically restored once the bugs have been fixed: questionable)

Therefore, I would strongly advise everyone to make a backup of their projects beforehand!

The blocks are mostly gone or incomplete…

Will they be automatically restored once the bugs have been fixed:

it remains to be seen

it remains to be seen

So what’s wrong with my advice?

The advice is correct, necessary, helpful and I bet the blocks won’t recover.
Do you bet against it?

helpful and I bet the blocks won’t recover.
Do you bet against it?

I Don’t Care if they are or not

P.S since solution is in the thread I linked to

I Don’t Care if they are or not

But will it be the same for those affected? I don’t think so when weeks or months of work was wasted.

since solution is in the thread I linked to

Apparently I had overlooked this link (which possibly happens to many).
I’ll have to take a closer look at that later …

However, it doesn’t change my advice to back up the projects beforehand.

Could someone explain what the different scopes refer to 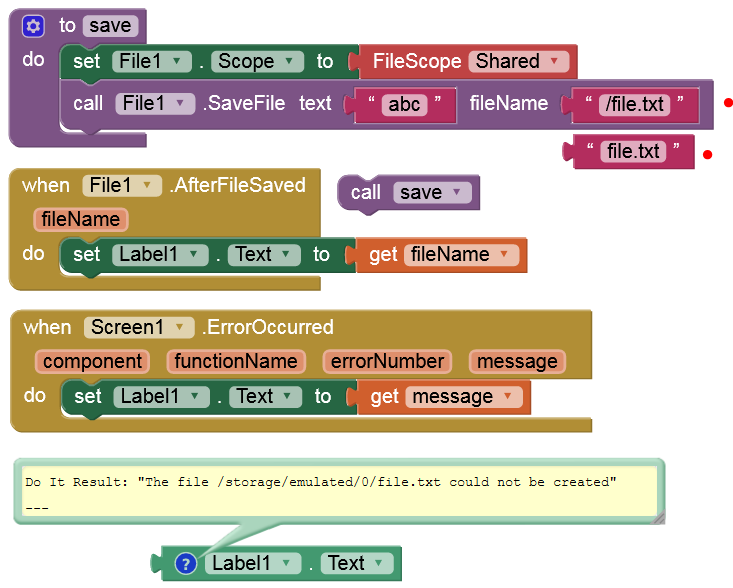 Yes, except for the small difference that when FileScope = Shared is set, the / at the beginning is ignored, so the file is always stored in external storage and not in the Private dir of internal storage (as is the case with FileScope = Legacy is if...

Search the AI2 community. I answered almost all relevant questions there regarding the new file system (File component).

This guide helped me the most:

Some basics on Android storage system

Anyone knows if the staff is aware of this bug / working to correct it?

Good question, but given the amount of bugs reported by the community, the answer to this is most likely YES, at least to the extent that the Kodular team is aware of the bugs.

It remains unclear whether the Kodular team is already working on fixing the bugs, as they probably don’t even know where to start.

But we should have received immediate feedback from the Kodular team that they would take care of the bug fixes as soon as possible.

As I said elsewhere, given the amount and severity of the bugs, it no longer makes sense to find and suggest any workarounds anymore.

But we should have received immediate feedback from the Kodular team that they would take care of the bug fixes as soon as possible.

That is exactly why i am worried. It would literally less than a minute to answer a thread or create a new thread saying “we are aware of the bug related do xxxxx and working to correct it as soon as possible, we don’t know what the problem is or when it will be fixed yet but we will keep you informed”

Just a few links on this:

… and please do not introduce the DefaultFileScope like AI2 did.

This is actually on the roadmap. Why is it bad?

Here is just a small selection of links / my posts I’ve made on the AI2 forums. (I have pointed out these bugs / issues countless times): https://community.appinventor.mit.edu/t/default-filescope-is-this-the-same-in-screen-and-file/44639/12?u=anke https://community.appinventor.mit.edu/t/default-filescope-is-this-the-same-in-screen-and-file/44639/5?u=anke

… and last but not least this one: