I want to make an app that tracks the screen usage of the user, the time spent on each apps in the device and data related to it. Is there a way i can do this with the help of a component or an extension?

Thank you in advance!

Its not possible to make this app in kodular. But the idea is good. Use android studio or flutter to develope

He is asking for collection of app usage duration from other apps, for this app need to be run in background.

I think you didn’t understand.

If a user open Whatsapp then how will you detect that WhatsApp is running and for how much duration it has been used?

I know that, we can track usage duration for our own app, but not possible for other apps.

May be it work, you can ask him and confirm.

tracks the screen usage of the user, the time spent on each apps in the device and data related to it. Is there a way i can do this 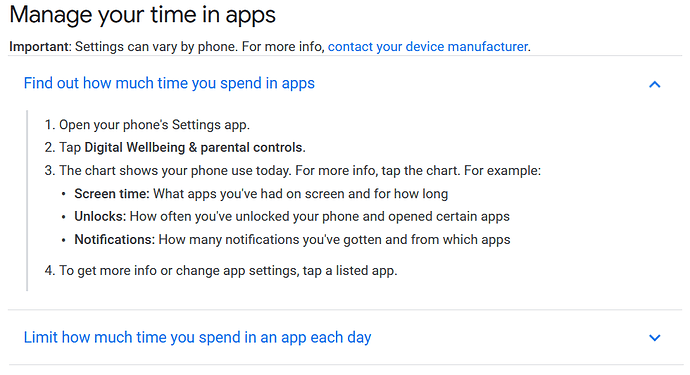 Manage how you spend time on your Android phone with Digital Wellbeing -...

So this feature is already there …

ik the feature or similar apps are already exist but i’m planning to so something different, but the basic foundation of the app requires me to calculate the screen time so thats why i need it.

So this feature is already there …

That is for Android 9 Pie only, no prior version of Android before Pie had this feature which means that those users had to use third party apps until they updated to Android 9 Pie.

I wanted to do something different and not just track screen time.
There’s this app sweatcoin which awards users when they walk. So i wanted to do imply the same idea but the difference would be the less screen time you have the more you earn kind of a thing.