How to stop the rain

Well i had to stop the rain in Boston when we arrived.

Yeah, but then we nearly burned walking through Boston

Can confirm that it’s working perfectly on Android 9 Pie. Also, I want to request a feature: can you make use of the Android UserManager API property isUserAGoat? Goats often steal my phone to change the weather

and I want to stop them

can you please make one such app for me in which instead of water drops, real dollars fall

. I know you can do it easily, don’t post the aia here, you may take some money out of mine

Nice work Peter, another great topic, I will surely use it in case I forget my umbrella.

Real life example of I want to make an app ?

That would be considered earning app, and it’s not allowed

Not working in my MotoG5S Plus. Instead of stopping the rain, it enhanced the rain and almost caused a flood in my neighborhood. What might I have done wrong?

Can you add an feature to make billionaire too? i hope you can!

That’s not allowed. That would make it an earning app like @Diego said.

let’s be honest here. im 100% sure even Diego will use your app if you add that feature… and your app will be the #1 in the world!!!

A download as apk would be nice.
No time to create it by myself

Added the apk especially for you in the first post. No one besides you may download it so don’t tell anyone. Ok?

that you @Peter for bringing this wonderful apk in my experience.

Legend has it… Many many years ago, in an era long past, someone in Africa used this app.

I also have a version for stopping snow.

On request by @Italo 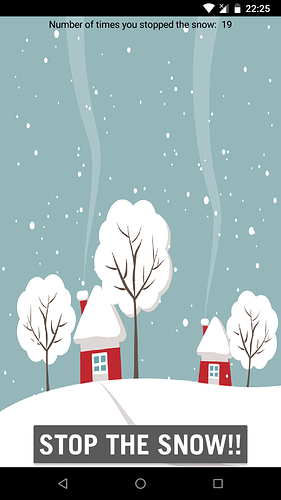 Or, I could’ve used your app

I could’ve used your app

No, my app only stops the snow not starts the snow. That is a different app.