How to use extensions

How to use extensions?

We frequently see users on the community who don’t know how to use extensions.

@pavi2410, one the Kodular developers is working on making the visible components possible during the Google Summer of Code 2020.

Hello everyone, Google has announced the accepted projects for this year’s Summer of Code. In my role as lead software engineer, I just wanted to take a moment to highlight the projects that were selected. This year we had a record number of...

So how to work with extensions when using Kodular?

If you want to use extensions you have to go to the extension category on the Palette.

After you click on the import extension button you get a dialog with two options. 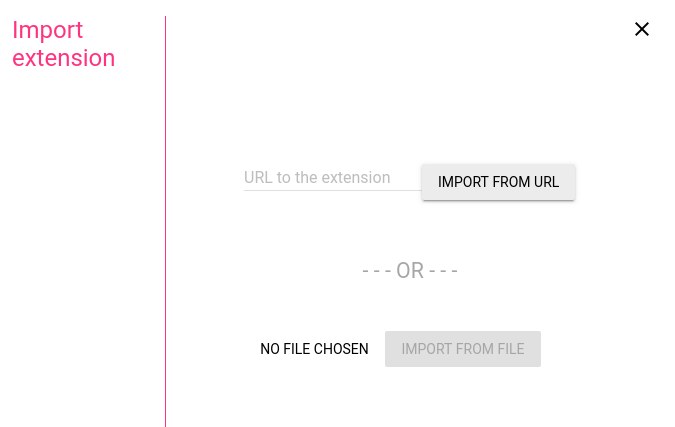 If you got the extension on your harddrive you have to press NO FILE CHOSEN and after that IMPORT FROM FILE.

Either way you choose you have to drag and drop the extension on the mockup of the phone to be able to use it. You can see that in the gif above.

When you go to the block editor you can see that your extension is also there and you can use its blocks like you would do with all other components of Kodular.

Remember that all blocks related to that extension will be deleted from your app.

When you want to update an extension you can just follow the process as shown above. Kodular will let you know you have updated your extension.

Let me know if you miss anything in this little guide.

4 posts were split to a new topic: What is the best way extension system

A question, what happen when building the app? Will all the extensions of the project be integrated into the app or only those which were actually used.

@Dokolo i think only those who were actually used

make more sens just wanted to make sure.
In general when i do not need anymore an extension i uninstall it to have a project cleaner but alway wondering if it will make difference if i leave it there.

If you keep an extension into your project which is not in use, it will only occupy the space of his size.

you mean in my app

or in Kodular servers?

But why you want to keep unused extensions in your project? Just remove them before compiling final apk!

you mean in my app

or in Kodular servers?

Ouch! i thought Kodular will just skeep them when compilling…
So i have to make sure to clean up before to do final release.

Ouch! i taught Kodular will just skeep them when compilling…

Besides its always nice to have a clean and tidy code of the app that we are going to publish to play store or distribute via any other means.
This is developers duty solely and not of Kodular