Image Blink with a button

Hello, any idea on how to make an image to blink after a button press?

I have two images that change with a button press, its a Open/Close button, I need that when it is first pressed (open)the new image blinks, then with the second press it goes back to the first image(closed) with no blinking.

these are my blocks 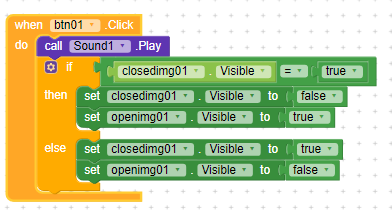