Because in-app subscription is not shown in my published app (Play Store).

What have I done so far?

Should i go to live-mode, instead of test-mode to test it?(Google Play Store)

What have I done wrong?

Screenshot of subscription in Play Store: 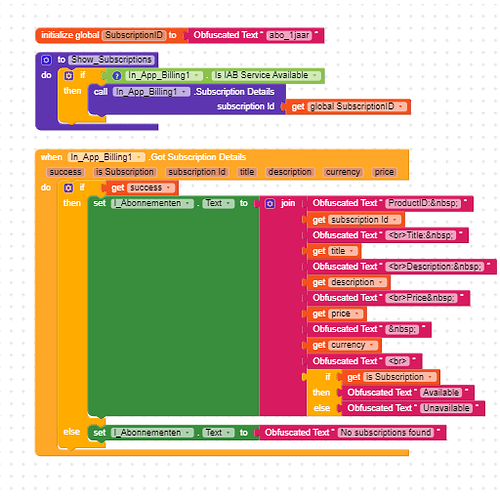 Should i go to live-mode, instead of test-mode to test it?

no, but what happens, if you try to subscribe?
also what will be returned from is IAB Service Available?
you might want to add an else part in the if statement to display a warning message as test…
Taifun

Taifun, I have I have followed your recommendations to find the error, with the following results. 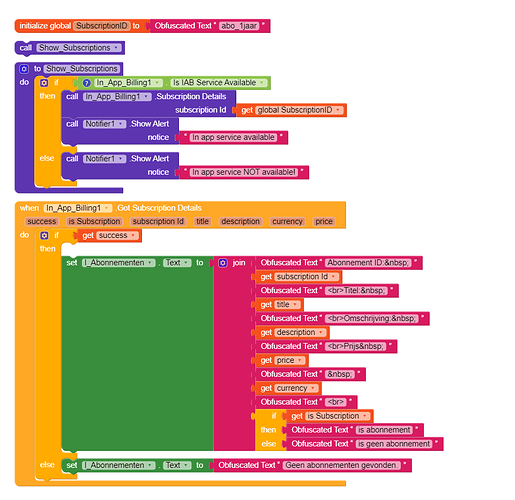 Issue The subscribe blocks is not working after the builder update.. I never touch my blocks because of its working fine with the last version of the builder. Step I try the same way by this topic.. Ps: I cant reply with this topic, so i have no option but to create anothe one

@Kodular do you agree?
Taifun
PS: as workaround I can offer to use my billing extension
https://puravidaapps.com/billing.php

In one of my projects i tried also to subscribe to the test product and it gave me the same results as yours. I don’t know if it is a bug or this happens because i don’t have my app published in the play store.

PS: as workaround I can offer to use my billing extension
App Inventor Extensions: Billing | Pura Vida Apps

@Taifun does your IAB extension works good with the subscriptions?

does your IAB extension works good with the subscriptions?

yes of course, see the subscription test project on my webpage to test it yourself
Taifun

Created bug report. Will check into this: