Hay guys please help me. In app purchasing component is not working on my created app. Tell me where i am making a mistake. i also use this extension Billing | App Inventor Extensions but it said item not found.

Tell me where i am making a mistake.

How. Where are your blocks?

i also use this extension

Do you want your account to get suspended? Iab extensions are not allowed. Also, Kodulad uses pavi’s extension so it would cause a name conflict when you imported it.

Iab extensions are not allowed

But to use @pavi2410’s extension does not make much sense, because it is an outdated version of the now built-in in app billing component of Kodular, see also

the extension from @pavi2410 is based on Anjlab’s library (version 1.0.39) I formerly also was using a 1.0.x library version for my billing extension , but upgraded it to 1.1 because Google planned to deprecate the Google Play Billing with AIDL, see also you probably still can use that solution until Google shuts it down. Taifun

However the built in billing extension still has some issues, which need to be fixed, see for example

How to buy the same product in app billing several times? Discuss

you have to consume the purchased product before being able to purchase it again however according to the documentation In App Billing - Kodular Docs the Consume method is deprecated… I don’t know, how you can consume the product currently using the built-in billing extension… @Kodular might want to explain… as workaround I only can offer my billing extension, which still offers that method… https://puravidaapps.com/billing.php Taifun

this statement is not correct

Ok, maybe the correct statement is that you cannot use IAB extensions while also using ads in your app 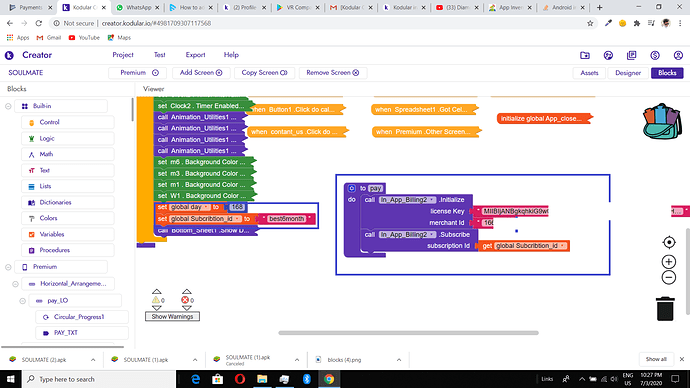 as already said use the built-in billing component
https://docs.kodular.io/components/monetization/general/in-app-billing/

or the working billing extension
https://puravidaapps.com/billing.php

yah i actually used built-in billing component yesterday and published on alpha production but its did not work. nothing happened

the built in billing extension is buggy
see also

@Kodular might want to answer this question for a workaround see this answer in post 5 of this thread this actually is a question for Google… sorry, I do not know the answer… what I can say is, that it has been always like this, see also answer no. 3 here Taifun

So what I do now any solution?

About 3 years ago on another platform. It worked.

@deanart2012
Is this a dangerous to my PLAY CONSOLE. I am talking about that for this statement.

[Screenshot_20200703-195219_Telegram X] Ok, maybe the correct statement is that you cannot use IAB extensions while also using ads in your app

What happened to this statement? Any explanation?

I bought this (App Inventor Extensions: Billing | Pura Vida Apps) extension . Its work good but there is no any (when after purchased) block . then i publish it alpha production. Its work good. yesterday i have published it on production rollout. but google reject my apk for metadata policy violation. I have just fix it and republished. let’s see what happens next.

In your app description

no no I wrote the word “can” twice. 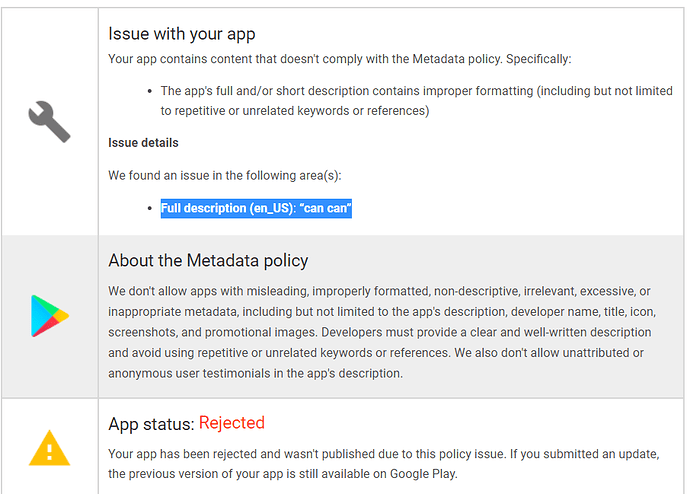 this is becaue of technical reasons… the example projects and screenshots provided here App Inventor Extensions: Billing | Pura Vida Apps demonstrate how to use the extension

So today my application is approved by google. And also in app billing system work fine. A big thanks from me to *@Taifun * for give me his extension. I recommend to everyone who facing the same problem to use this extension (App Inventor Extensions: Billing | Pura Vida Apps). please ignore my bad english