I’ve made a fairly complex (to me:) fortune-teller app.
It runs very well on kodular companion online test. 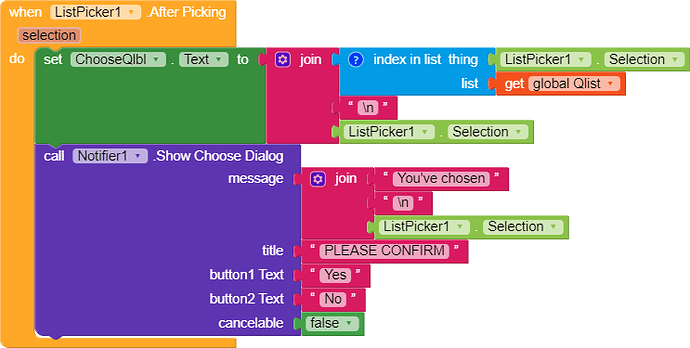 The first run was always OK to call the Notifier1 as shown in the block pic.
But after the result pop-up according to the buttons of the notifier1, ie the app is ready to run next round. In this next round action, only the first part of the block run (the ChooseQlbl text was set) the second part never appear! (Notifier1 was not called).
This hiccup seemed to be appeared only after the app was compiled into apk: ie online test are fine, the hiccup appeared after installing the apk to device.
Any way to correct it?
Anybody could give any help or opinion please?

Thanks Boban!
After first notifier call, the screen switched to another one.
The notifier cannot be called after coming back from that screen: ie second run of the block.

Do you have a notifier there as well, if so then it wont work unless you switch screen properly in Kodular

Thanks again Boban, I’ve checked there’s the “close screen” block for the other screen. My app has only two screens.
So I’m sure the other screen closed, the notifier there has already closed too.
The hiccup appeared /noticed after apk install when back to the parent screen. My wonder is only the first part has run but the second part of the block (as shown in pic: the Notifier1) didn’t pop up.
Another weird experience is the app is ok for online test in companion. The hiccup only appeared in apk installs!
Kindly guide me your thoughts. I’m reading your recommended guidelines.

GOT it!
Someone here said ( Notifier or dialogs extensions are not working properly )

Notifier is working good but when closing a screen and bank to any screen then its stopped working , and in maybe next release Kodular team fix that issue,
I think I’m facing the same problem, if so I’ve to wait Kodular team fix it.
Thank you.

We have find solution for that and working now, but we need an extra method to close screen while opening other

We have used this solution to solve notifier problem, when you click any button to open another screen or press back to close screen use this method, where i used permission granted, use your button or press back there 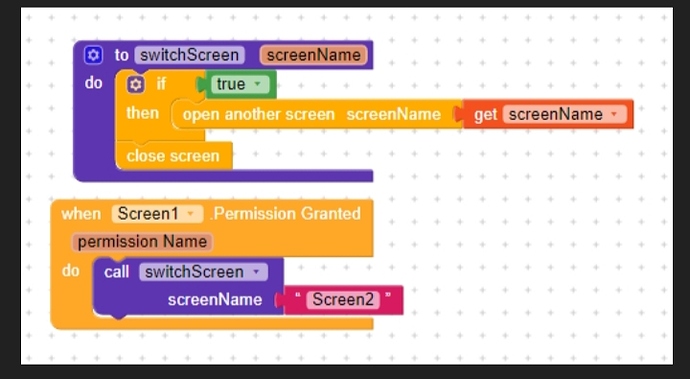 Didn’t I explain this in my previous post already

Do you have a notifier there as well, if so then it wont work unless you switch screen properly in Kodular

Finally, after multiple testings, I used a Snackbar (from User Interface ) instead of Notifier on other screen.
Lessons: If the app has more than one screen and Notifiers are there on screens
be sure to switch screens properly (open & close screen blocks).
Easy solution would be placing a Snackbar.
Read this discussion for more info >> Notifier & Admob Bugs (Possible)

After a ton of exporting and diagnosis, here are some issues I came across…

Anyone else experiencing this or is it just me?