Talk and share the screen on your own site / agora io

I have been searching for a short time to use Agora io on both web and mobile. Has anyone tried such a thing @jarlissonlira2 I have combined the js, css and html file in aia, but I cannot find that I will integrate the web because it takes the app id and channel name with the blocks in aia. I am waiting for your help if anyone has tried this or if anyone is knowledgeable thank you FIKIR_KUMESI

The main purpose of doing this is actually I am developing a chat application and I wanted to offer such a feature to my premium users, but I thought it was important for other developers to be free.

frankly these were some of my problems
I tried this on some free web servers, but I could not find a result. This was exactly what I had. In fact, not being able to grant the necessary permissions (camera, microphone) and finding the right web server (free one)

but I found the right web host on other web servers, even if you ask for permissions in the coding section (free servers)

github pages solved my problem and I simply integrated my codes and managed to run agora.io actually agora had its own sites but it was simple and the web integration was bad, so I got help from some sources. 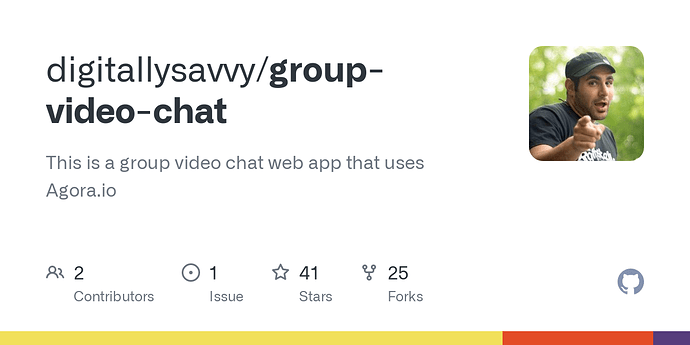 This is a group video chat web app that uses Agora.io - digitallysavvy/group-video-chat

he was used in the practice with agora.io. Thank you for providing this repository.

integrating agora io into kodular.io @jarlissonlira2 idea of
I would like to thank him, too. I wouldn’t have thought of it without this attempt.

1.Introduction I created a video call application using Kodular + Agora. With it you can make video calls even in groups, with excellent control and response. Well, Agora.io is a video call service, which has more than 200 data centers distributed around the world to guarantee ultra low latency (~ 300ms) and resilience to packet loss (up to 70%). All with 10,000 free minutes per month. In this application I used the CustomWebVideo extension from @vknow360 and the ListPermission created by me. T…

It may not be attractive to some people, but I think what I do is a good thing, after all, it supports big site building companies such as agora io wordexpress as a plug-in, but I did it for free, if others want to use it, they can use it.

I will send it as soon as possible, please be patient, there are small snag
I need to change some code
thank you

I have other works and what will you use it for

I will publish as soon as possible

For now i unlist this. Let me know when it is ready.

the site is published, sorry it was completely out of my mind, you can try

I saw your site. This is not Kodular related it seems. Or can it be used inside Kodular. The log in screen is in Turkish?

Yes, it feels easier to translate to English and it is easier to work with my native language.

i am translating to english

I thought that developers can use it in their own programs, so there are many people trying to make applications.
thank you

what is the reason you turned to argument ??? @Peter

translated into english language.by the way