What about the package name?

I have some doubts regarding the migration of appybuilder to Kodular.

I don’t want to wait until the adaptation is over, I want to import my most important project now.

my questions
Are they happening if I do the import now?
I understand that I will lose some blocks.

What will happen to the packagename, will it change?
Will it be the same?
will I have to change it manually?
Will it affect my users if I launch an update?

excuse my english, in very bad

I am new to Kodular, I was before an AppyBuilder
Kanishka_Developer (Kanishka Chakraborty) September 16, 2019, 12:53pm #2

Export your keystore from AppyBuilder and import to Kodular. If the package name does not persist for some reason, add it manually, and build the APK: it should work absolutely fine.

Keep in mind that we are working on migration allowing imports of AppyBuilder .aia project files

I get it! I don’t use a custom package name, only the one provided by appybuilder, by default, I guess I’ll have to keep using the same

I will do some tests to observe what happens, I hope not to lose too many blocks.

After removing all the spacer in my app and reloading it to kodular, I find that InAppBilling is not compatible either, I did not want to move forward because if I try to eliminate everything that I do not find I will be without blocks or elements hehe.

The road will be long in the transition so I will have to wait the next year for kodular and appybuilder to improve the fusion.

and understand you. We are working hard to make the imports easy and appreciate you and others patience. We may later ask those interested to test on a beta server.

I try to immigrate my apps from AppyBuilder and have a lot of issiues.

One of them is the package name. I remade an app on kodular and gave the package name manually, but after compiled it I can’t install it to my phone. If I let it blank, it installs but I need my old package name which I have in Play Store. What to do?

I did what you said, but it is same, I can not install.

Have you uninstalled your previous app with the old package name?
What about a device reboot?

Yes, I deinstalled the app from my phone which I made with AppyBuilder and downloaded from Play Store and after that I could the app made on kodular.
But this time I have this problem which I did not have when the package name was not given. 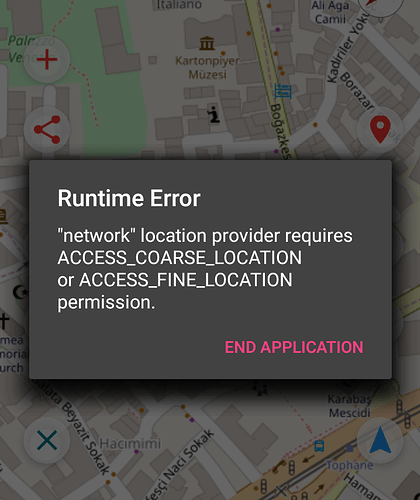 Please show us the manually specified package name.
It should be the same as the one on AppyBuilder.

If the package name was changed correctly, it should also work without uninstalling the app beforehand.

It is the same name, I controlled it. It was was a copy-paste process.

But this time I have this problem which I did not have when the package name was not given.

Because the old version has (probably) already granted this permission.

It is the same name, I controlled it.

To be sure, let the community control it.

As I said before, if the package name is correct, the app would also be installed without uninstalling the old version beforehand.

If the package name was changed correctly, it should also work without uninstalling the app beforehand.

Doubt it, because activity class name is not the same

because activity class name is not the same

No activity is used but

I have never had any problems with this if I have correctly declared the package name, at least with AI2 projects with which I have switched to Kodular. Should this be an AppyBuilder specific problem?