INTRODUCTION: before opening this topic I looked for similar posts, but none of the existing ones are similar to mine, also they are dated to previous versions of the current version of Kodular, please understand me, thanks.

I was going to update my app, but as soon as I insert blocks and components other than those that my backup has, I get this error:

Reading various similar posts I heard that some had this problem due to the multiplicity of screens in the app, but I only have ONE.
I am also attaching the summary image of my project made by Unchive. 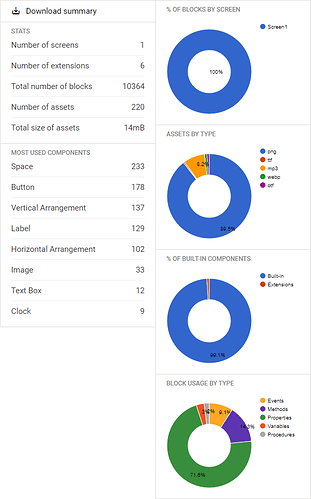 Check up your home screen… Any component are having same name like… Also check whether is there any project within project?, maybe

your error message is DX execution failed this is a very general error message and therefore it’s hard to say, what might be the issue in your case however there is SteveJG’s monster list of tips and tricks you can check for possible reasons… good luck! let us know, what you find out… btw. it would help to search the forum… Taifun

I tried to do various operations:
-I changed project, taking back an old backup and adding the new blocks ONE BY ONE, doing the test of the conversion to apk sometimes to see if it gave me the error.
-I removed and optimized almost 500 blocks, to make sure that the error was not due to the maximum limit of this one.
-I removed and added blocks without making the app and the blocks that constitute it unstable.
-I removed all Banners that were reported to me by Unchive as errors.

Nothing, I’ve gotten to this point, and I’m missing 2 new buttons to set.
If I try to do it it gives me the error.
And NO, it wasn’t just the blocks to set those buttons that triggered the error, but also other components that I optimized.
But I can’t optimize these blocks, they have to go into the app as they are, and at the moment I’m unable to get my hard-earned APK.
I have been working on it for 4 days in a row, I begin to be frustrated and exhausted.
Again I am attaching the image that summarizes the analysis of Unchive.

P.S: I looked at the links you sent me, but they weren’t able to help me. 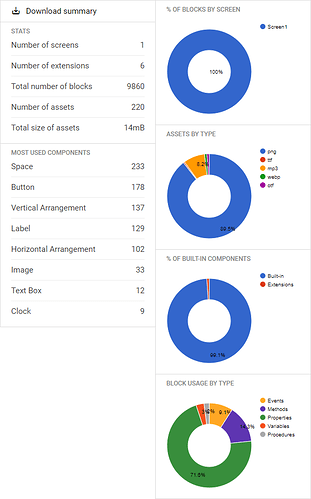