A zoomed element that is then made invisible remains visible, but it's removed from the normal flow of the page

If you zoom an element (tested with arrangements/buttons/labels) and then made it invisible, the same element remains visibile on the screen, but its space is removed from the flow of the page. Watch the video to better understand the problem:

Take a visible element, Zoom it (in or out) and the make it invisible.

The element that has been made invisible should disappear from the screen.

The element remains visible on the screen, but the space previously covered is taken up by the surrounding elements. 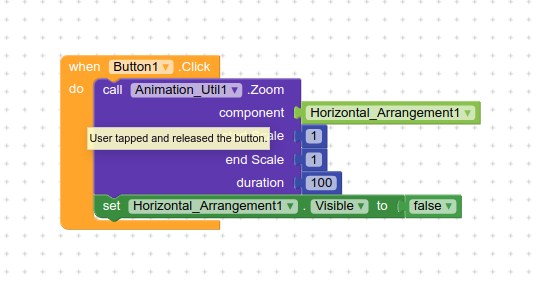 AIA and APK files for test

That’s no bug…
If you make any component invisible then the other elements take this new place.

And it remains visible on the screen?

If you use Animation_utils/Zoom on an element and then make it invisible, this element should disappear from the screen. But it actually remains visible. Only the space it used to occupy is “deleted”.

This is the exact same behaviour as a bug I reported for buttons.

Describe your issue If you add an img to a button, and then try to toggle when it is visible and not, it will not go invisible once it has been made visible. Steps to reproduce the issue two images uploaded to assets (pngs), manually set them to 45/45 pixels on each of two buttons. Set two buttons and two labels. Error also occurs if you leave the settings to automatic. Companion and APK. Expected Behaviour Once a button is toggled through an event to be invisible, it is expected to do just…

As you can see, after it has been made invisible it actually remains visible ,

in the blocks, it reports that it is false/invisible but still remains visible

So would this logic (as you provided @Boban for my other question) help force it?

in the blocks, it reports that it is false/invisible but still remains visible