Bug or fix the blocks?

I’m having a little problem with an app of mine here, and I need your help please.
I have this block where I store data in firebase. And for each user is generated a specific database. 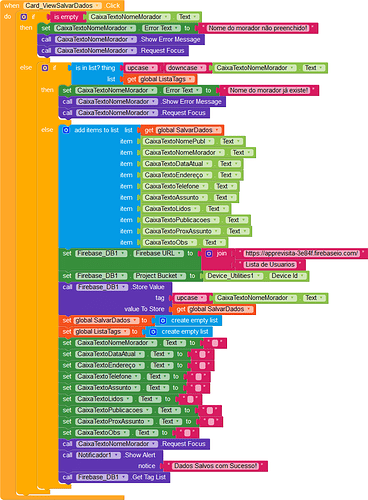 And below I have my database with some names.

What can this be? Bug or block adjustments? 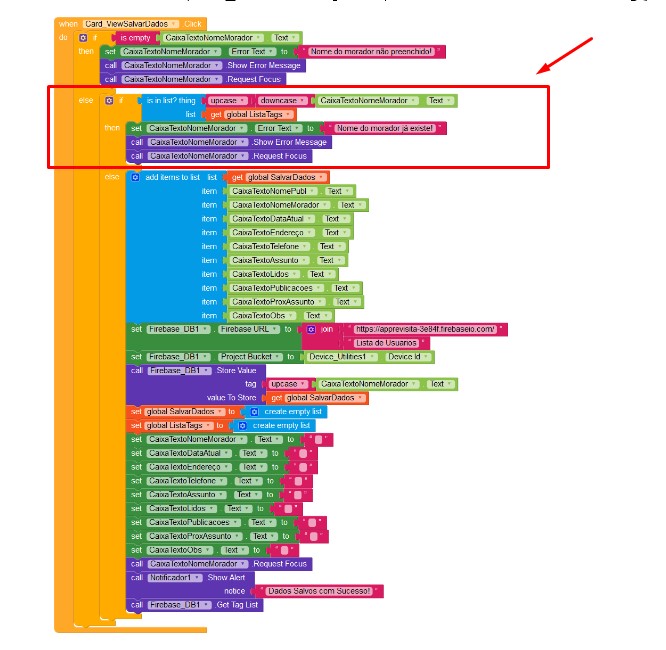 Your problem and your way of asking is always very strange and it takes me a lot time to understand time, Lol. i am trying to understand …

I have in firebase these tags:
IGOR
IVAN SILVA
PAULO
PEDRO

In a new registration, when entering these same tags, the value is replaced, but when I enter the second time the same tag the app, will work correctly, saying that the name already exists.

then the app doesn’t load the data of the firebase when it opens.

No. I will try to explain in parts: ok?

I already understood it.

It seems to be, that if you save a data onto firebase, it overrides an existing data. You said, that this is not allowed to happen. This works, when data is stored first time and tries to save second time while app is still running. but if you close the app and restart the app, you can store a data that already exist.

Maybe there is a block “check, if data exists already” but this block is not addressed at the expected moment.

That!
See how the blocks are!
Where it is marked in red was not to allow existing data.

in simple, try using without upper case down case blocks,

It didn’t work out either!

maybe you can delete the block “downcase” because you are storing the value in upcase. I hope you figure out soon.

otherwise you have to check if TinyDB stored value is “not empty” instead of checking in list. because you delete the list after storage in TinyDB.

The database is not in Firebase and not in TinyDB.

I’ve done the tests without the uppercase letter block. But the same problem remains.

yes do it with firebaseDB.

Thank you for your attention and help.
I tried your suggestion but it didn’t work either.

this is a riddle then.

Can someone give me a force?

As I read the blocks, the list “globalListaTags” is deleted after they have been saved in Firebase_DB1.
That means next time the new entry of the user should NOT be in the list, since it is empty again.

I will do new tests here!
Thank you

Can you show the updated blocks