Detect touch up when already touching down after screens transition

I’m developing an app with two screens and in the first of them my user has to touch down a component. Then the app opens the second screen (whit different components) while the user have to continue to touch down… now how can I detect the user touch up if components are different and the user is already touching the screen?

button component already have this function

Thanks for your response

but my question is different and more complicated. I don’t know any words to explain better than my first post…

plz explain it more
bcoz that much info is not sufficient

it can mean lots of things, like
you want to make an app in which one can open and close screens by swiping up or down like a view pager (view pager which works vertically)

here which component you are talking about?

if you have any video then that will be better

Okay I try to explain better

I have created a demo app to show what I mean. In this demo app there are only two different screens. In the first screen there is a button: if the user touch down this button, he pass on the second screen. If the user hold down always the finger while he pass on the second screen, when he left the screen with his finger (and so touch up the button in this second screen), the label is not showing and I would like it is (of course the buttons are in the same position and the user have to remain within them with his finger). Maybe this is not possible, but is there however a way to simulate this? Maybe detecting screen touch up and not button touch up… (I have shared below the images of the two screens with them relative blocks) 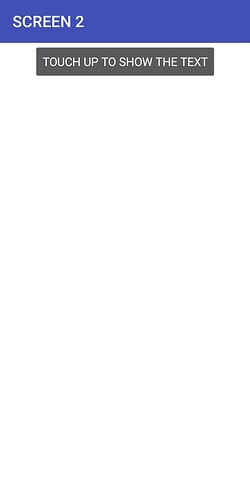 how can I detect the user touch up if components are different and the user is already touching the screen?

use only one screen and arrangements as virtual screens, see also tip 1

Yeah, I think it is the only one solution, thanks