Thank you for your contribution!

But i saw that somebody published Nepali Calender Extension

I don’t know whether the extension you’ve made can be achieved by using default Kodular’s default blocks or not but Nepali Calendar can’t be achieved.
Mainly, I’ve made NepaliCalendar extension to support conversion of Dates offline , that is not possible within def-blocks.

Morever , Nepali Calendar extension is open-source , you can see the logics and codes I’ve used to make the extension . 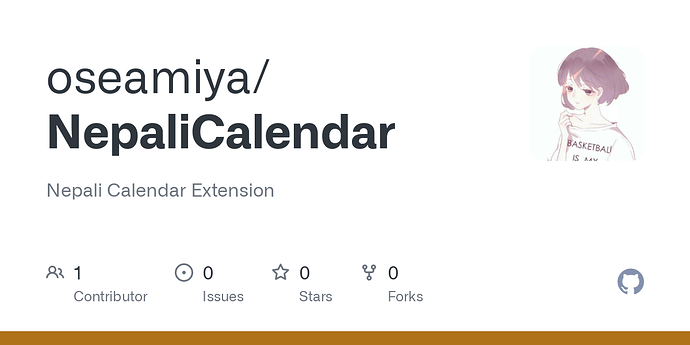 Nepali Calendar Extension. Contribute to oseamiya/NepaliCalendar development by creating an account on GitHub.

I ask for forgivness, but I did not mean to say that the Nepalu calendar extension is not useful.
On the contrary, I got the courage from this extension to publish mine, even though I knew that it would mainly interest Jews.
And again I apologize if I was misunderstood

@Peter Have a look, the post contains words that directly or indirectly mean impersonation

I guess you misunderstood.

You are over emphasizing his words and making everyone misunderstood about him.
That’s not fair.