I tried enhance extension its not work, i will try this thanks for reply

Funy part pavi is part of the Kodular team

My temporary solution was to use the IAP extension of @pavi2410

that solution uses version 1.0.39 of the Anjlab library, which results in a warning message after uploading the app into Google Play, because Google deprecates the Google Play Billing with AIDL end of December 2019.

Let me contradict you

No warnings in my Play Console

Yep i dont see any error when i was upload my app to playstore. Maybe its uses newer liblary

The subscribe blocks is not working after the builder update.. I never touch my blocks because of its working fine with the last version of the builder.

I try the same way by this topic..

I checked out Bugs in Kodular Eagle before creating a new topic Describe your issue I tried in app billing component. Purchase block working. But i cant run subscription block. Its not appereal any iab ui. Can someone check? There no problem with Google Play developer Configs all okey Steps to reproduce the issue Try subscription block of in app billing. İs it work? Expected Behaviour Actual Behaviour Show your Blocks Android version 9

Ps: I cant reply with this topic, so i have no option but to create anothe one 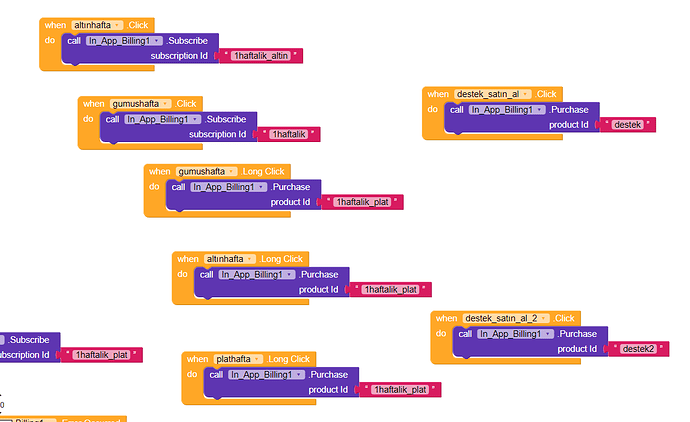 I asked because you posted the exact same blocks as he did in post 3.

I dont need to show my block because of my subs ID im protecting it. The images says it how i block it the same way, give it a try if its work to you

He should still post his own blocks. There have been so many times when people say they are using the exact same blocks from another example or aia but it later turns out they have made a tiny error.

Guys, I really feel stress and stuck with subscription block of google app billing. Always error. Could anyone give block example only for simple subscription block. Free and premium feature thats is ads removal… thank you

Created bug report. Will check into this:

I need just simple subscription example block. For free there is an ads and for premium no ads.

Since im the new one with programming and kodular so i dont understand well with this kind of block. 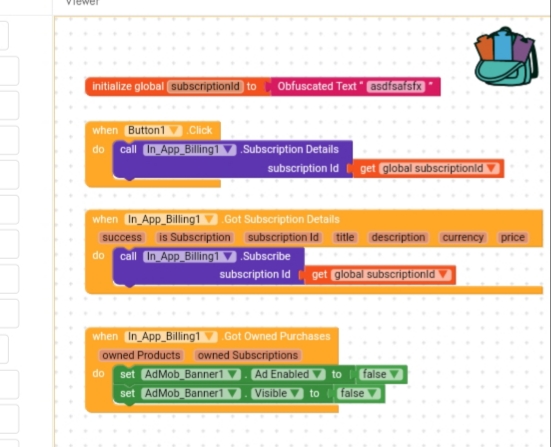 Thank you so much for your kindness

What type of error you get?