Anyone knows Admob policy for showing interstitial ad on the back press. Not talking about the back button inside the app but mobile’s back button. The following link does not give any info about it: Disallowed interstitial implementations - AdMob Help

It is not allowed to show Interstitial Ads on backpress.

better to search it by yourself.
any ways some Guidance Interstitial ad guidance - AdMob Help

Instead of showing interstitial ad on back press you can set it when screen initializes.
For example a user had pressed back button when he was in Screen 2 and Screen 1 was opened. As you have put ad on the Screen 1 initialize, ad will be shown.
Ad Implementation
If you want that ad not to be shown when the Screen 1 of your app is opened for first time then set start value when screen 2 is back pressed and make block such that if start value equals to some value then show ad. 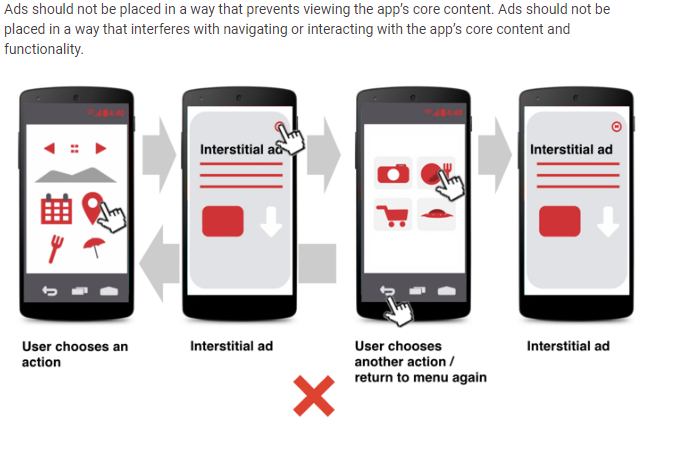 Not allowed as @ramrajput200021 already said.

Hello friends,
I want to integrate interstitial ad in my app but I do not have too many screens in my app, actually, it has only one screen. The app basically provides some randomly generated guidance notes which requires only one screen with a vertical scroll layout. This is not a query but just a request. If anyone has implemented interstitial ad on one screen then please share here, this will also benefit others.

You put the interstitial ad into the screen you want to appear your ad. The advertising is displayed on the screen like a widget. just put the ad in the designer (non-visible component) and configure ad via blocks (time to show, what to do when no internet connection a.s.o.)

Can I have a screenshot of block implementation.

Wow. Thanks for the help… Really appreciate it. You made my day. Thank you.

always use show interestrial Ad block in event When admob1

I know it but he just want to know where to place it not how to place it.