Here’s who has put their APP on Playstore for more than 1 year.

if anyone has published app on playstore so plz share the playstore link here.

Even the oldest Kodular apps are pretty new. Makeroid apps are the veterans.

Anyway, SketchPad has been on the Play Store since January 21, 2018… So it fits your definition of old. The latest version was compiled with Kodular.

Right i know that.

I met some developers, they said KODULAR and App Inventor App are being ban on playstore. And if we publish a Kodular or App inventor App then the playstore removes it in a few days(in 1-2 month). So I have to confirm that is it true or not?

if we publish a Kodular or App inventor App then the playstore removes it in a few days.

Hahaha absolutely not. Just look at SketchPad. It has been there for almost a year and a half.

And no, since the release date is what determines the age.

I think you have updated app on April 7, 2019. that means you have uploaded fresh apk to playstore.

that means you have uploaded fresh apk to playstore.

i have seen your other old app is - ALPHA

so is that app developed with kodular?

The version of ALPHA on the Play Store is developed with AppyBuilder. It was originally made on App Inventor 2.

Marble Solitaire Brazil has been on Play Store since December 2016. It was originally created with AI2 even the package name remains with it. If I’m not mistaken, the releases from Makeroid/Kodular started in September, 2018 on.

I was upload app on 4 feb 2018 and still on play store without any problem. With 100k+install

I know why you are asking this question. I watched a video on YouTube in which he was saying that Play store is removing kodular apps after 5 months… But it’s not right​ 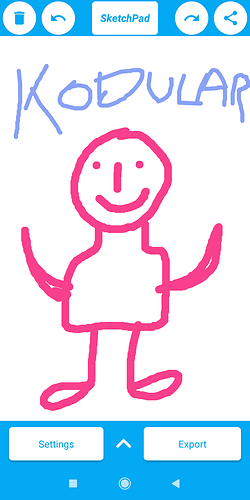